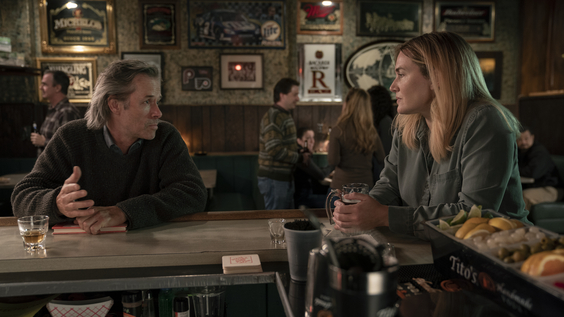 Kate Winslet can do little wrong, especially when she’s in a movie!

I was missing seeing her in a good, meaty project, but HBO’s “Mare of Easttown” gives Winslet room to do her thing, and she is terrific. Sunday night’s premiere at 10pm brought in 1 million viewers, too, so the murder mystery is a hit.

HBO is really becoming the go to place for well crafted limited series. Coming off Nicole Kidman and Hugh Grant in “The Undoing,” following “Beautiful Little Lies” and “Sharp Objects,” you can see a trend. And let’s not forget “The Night Of.”

“Mare” is a little “Fargo”-esque as Winslet plays a local female detective in rural Pennsylvania. But unlike Marge Gundersen, Mare is not pregnant or married or clueless. She’s divorced, sexy, flawed (and knows it). When we meet her it’s a year since a “Twin Peaks” type crime, a young girl gone missing. By the end of the first episode, there’s a new murder, this time with a body, and Mare is going to have come up with the answers.

(I’ve only seen the first episode, I have four more to review.)

But you know you’re in good shape with a murder mystery when you’re already guessing what might happen. The great Australian actor Guy Pearce turns up in town, seemingly oblivious. He’s a creative writing teacher. I’ve already decided he’s a serial killer. But he sleeps with Mare upon meeting her in a bar, and he seems like a good guy. Right.

At home, Mare has a small crowded house filled with working class problems including a college age daughter who’s got a small kid. She also has her mother– Jean Smart!– and an ex-husband who’s bought the house behind hers and is getting married.

The opening episode had a lot of characters, and kids, and babies, it takes a minute to figure out who everyone is and how they’re related to each other. But there at the center is Winslet, who is a movie star through and through, and a great actress. Within a week or so “Mare of Easttown” will be watercooler talk, or water bottle, or virtual water cooler. It’s got all the earmarks of “The Undoing.” Meaning, it’s a hit.