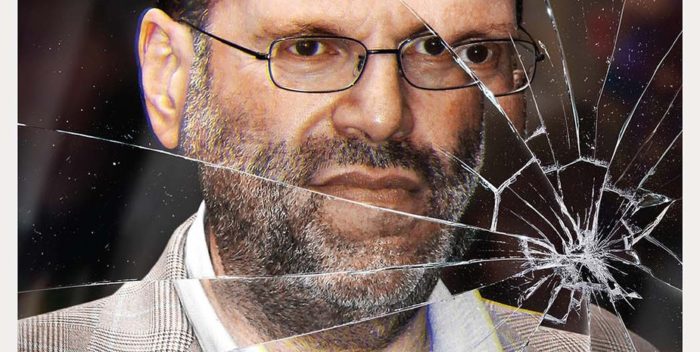 Hollywood and Broadway producer Scott Rudin has made the cover of the Hollywood Reporter. The word BULLY is emblazoned on his picture.

This is old news, kids.

Back in 1998 he sent Paramount Pictures publicist Allison Jackson a memo that was leaked everywhere. This is what it said: “The only thing separating my hands from your neck is the fact that there are three thousand miles between us.” This was because he didn’t like the way she was handling the premiere of “The Truman Show.”

“Be aware that this is the last movie of mine you will have anything to do with because the prospect of having to go through another one of these events with you makes my skin crawl.”

He said she was nothing but “a hostess, nothing more; you create nothing of value except hors d’oeuvres and guest lists. You’re not even smart enough to know who not to offend. You may have kissed enough ass to get you to where you are but . . . you’ve got a lot to learn.”

When I saw his movie, “The Social Network,” at an early screening, he called me five minutes after it was over to declare the David Fincher film was the best since “Citizen Kane.” He warned me if that if I didn’t agree, I’d be “like the people who saw 2001: A Space Odyssey and didn’t understand the meaning of the obelisk.” When I was ambivalent with that description, and “The Social Network” didn’t win the Oscar, Rudin banned me from getting press seats to his Broadway shows for review.  In an email, he called me a “mooch.”

Up to that point, I’d never written a single negative thing about him or his shows. Since then, I’ve paid for every seat to every Rudin show. I was lucky that he made all tickets $40 to a benefit for the Actors Fund of his failed musical, “Shuffle Along.”

Unlike every other Broadway producer, Rudin doesn’t host an opening night that’s open to press. He has no opening night party. He made his last two big presentations, “Hello, Dolly!” with Bette Midler and “To Kill a Mockingbird” with Jeff Daniels, ugly, unpleasant, viciously expensive episodes for anyone writing about Broadway.  It’s hard to have sympathy for him now.