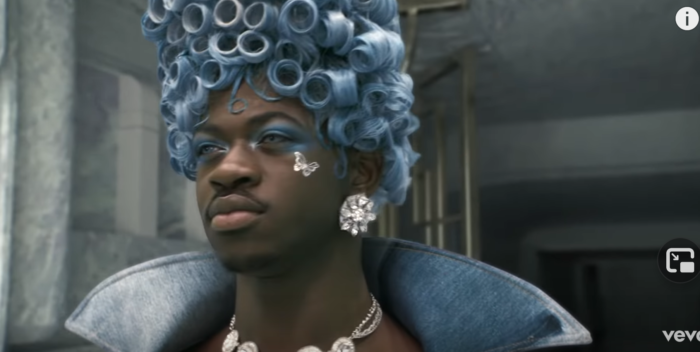 What a week for Lil Nas X. And we thought he was a one hit wonder with “Old Town Road.” He’s not.

Lil Nas’s second BIG hit is “Montero (Call Me By Your Name),” finished the week at number 1. He beat Justin Bieber’s “Peaches” among other more mainstream projects.

In the complex, artful “Montero,” Lil Nas X twerks with Satan, offers gay themes, dances with the Devil, and religion gone wild. The video, which has had as many plays as the streaming audio– 20 million apiece– has the best graphics seen in a long time.

There’s even a piece in Time magazine explaining the symbolism!

At the same time that “Montero” took off, Lil Nas X caused a mini scandal by selling customized Nike sneakers containing a drop of blood. For people who couldn’t process this, the sneaker business became its own hot topic. Lil Nas X is smart, and knows how to play social media and PR. He got a huge amount of attention this week.

Will there be remixes? Somehow. An album? Inevitably.

The main thing is, Lil Nas X, flamboyant and thoughtful, is very smart, and he’s sticking around.