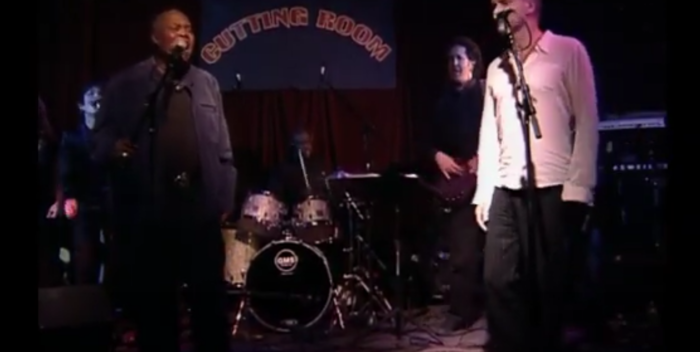 “None of Us Are Free,” the proper version, with Sam Moore and Sting is included on Sting’s new “Duets” album. It came from Moore’s “Overnight Sensational,” produced by Randy Jackson.

The two singers and Moore’s band fronted by Ivan Bodley also recorded the song live for Charlie Rose’s TV show in December 2006. The video is below.

The recording took place at the Cutting Room in NYC then on West 24th St. Lots of young singer songwriters used to use to the Cutting Room for rehearsals during the day. One of them was there that day, a girl with dark hair who could really play the piano. We met her and waited until she was finished before I watched the taping.

Her name was Stefani Germanotta. About 18 months later I saw her on TV, performing under the name Lady Gaga. I said, she looks very familiar.

The Cutting Room is over on East 32nd St. now and waiting to come back to life full speed ahead!