Former One Direction singer Zayn Malik is upset he wasn’t nominated for a Grammy Award. He’s so mad that he told them on Twitter to “F” off in so many words. He wrote on Twitter yesterday: “Fuck the grammys and everyone associated. Unless you shake hands and send gifts, there’s no nomination considerations. Next year I’ll send you a basket of confectionary.”

The problem is that eligibility for this Sunday’s Grammys was cut off last September 30th, 2020. Zayn’s album, “Nobody is Listening,” was released two just months ago, in January of THIS YEAR, 2021. So it was months and months late. His prior album, “Icarus Falls,” was released in 2018, two years before this session’s deadline.

Also, both albums sold around 2 copies and were very, very bad.

Seven hours after his first Tweet, Zayn was chastened to follow up with this observation: “My tweet was not personal or about eligibility but was about the need for inclusion and the lack of transparency of the nomination process and the space that creates and allows favoritism, racism, and netwokring [sic] politics to influence the voting process”

Got that? It’s racism and “netwokring” that prevented his nominations. How about making a good album and releasing it on time? That might be the answer.

Poor Zayn. Does he have a manager? Does he take advice from anyone? He seems to be his own worst enemy. No one can be this clueless. 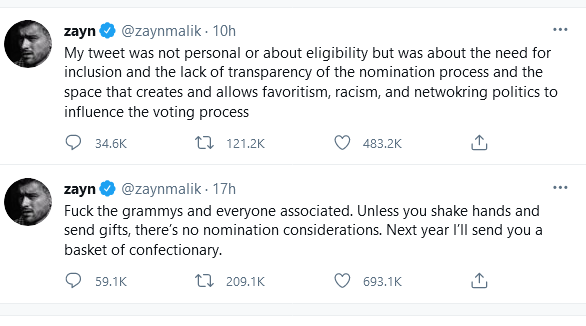