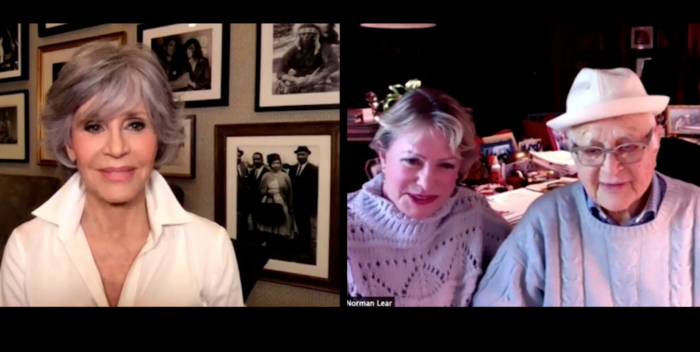 Despite the scandals surrounding the Golden Globes, there are plenty of highlights. Jane Fonda and Norman Lear are receiving Lifetime Achievement Awards, for movies and television, respectively, and philanthropy and activism. They are remarkable people.

Fonda and Lear were interviewed together on Zoom for the Globes. I’m hoping to get the full video. But in the meantime, here are some quotes.

The Globes are on Sunday at 7pm on NBC.

On being selected as the Cecil b. deMille and Carol Burnett recipients:

Fonda: “I burst into tears. It was so unexpected. And it’s such a great honor. And it made me so happy that I burst into tears. I’m so grateful to the Hollywood Foreign Press Association.”
Lear: “I burst into an image – If I was ever sandwiched between Jane Fonda and Carol Burnett. I can’t tell you how much I love that image and how proud I am to be in the middle of those two.”

On Norman knowing Carol Burnett, her having a special place in his heart, and now receiving her namesake Award:

Lear: “Oh my god. Yes. For all the years before I got really started. There was The Carol Burnett Show for a number of years. And nobody ever made me laugh harder. You know, Jane you may remember – I’ve said it so much all my life that I couldn’t believe anything more than that – laughter adds time to your life.”

Lear: “I bought a home from the Actor Paul Heinreid. And we were starting to raise our older children. We have six children, the three older children were raised in a home I bought from Paul Heinreid. I lived in that home for a little while. He was a major star at the time. I lived at home for a little while and I had to, I had to change a fuse once and I went down to the fuse box. And for the first time I saw these names I saw Mr. Fonda’s dressing room, Mrs. Fonda, there’s Fonda Fonda Fonda. And I couldn’t get over it – that all the years Henry lived in that home and never changed those fuse boxes. The name Fonda, he wished to honor.”
Fonda: “And I remember when, when I visited you when you lived in that house. And we went down to the basement and we looked at my mother’s writing on those fuse boxes. It meant the world to me.”
Lear: “I lived in it for 30 years and never ever considered changing it.”

On Norman extending a hand to Jane:

Fonda: “I’ll tell you something that I remember really well. At the height of my being controversial, and I wasn’t getting hired very much. You invited me to be on stage with John Wayne, for the launch of People for the American Way. And that meant the world to me, because that wasn’t happening to me very often then and you went out of your way to send me a signal that I was still acceptable in the Hollywood crowd.”
Lear: “I’ll never forget that, and I can see you – Honest to God, this is true – I can see you on that stage right now. I see you standing there. There is a photographic image that I’ve seen a number of times through the years.”

Fonda: “Fire Drill Fridays! Norman came, Norman and his wife Lyn, came to my Fire Drill Friday rally, the first one that we had in Los Angeles after we left Washington, D.C. And he spoke, and then he marched with us to the offices of Matador Oil Company. He was ready to risk arrest. He’s a brave man. That meant the world to all of us.”
Lear: “I was kind of disappointed that I didn’t get arrested! I have yet to get arrested.”
Fonda: “Stick with me kid.”

On what Jane respects about Norman:

Fonda: “Norman is the greatest genius. He was the first of this and he did it the most geniusly – I’m thinking of All in the Family – to put social problems, social divisions on major mass culture. So that people began to question their racism, their xenophobia, their misogyny, while they were laughing. See, Norman understands. The great thing about laughter is your guard is down. And when your guard is down, new ideas can come through to you because you know, you’re not prepared. And so he allowed people to receive new and more progressive ideas while they were laughing. There’s no greater gift – artists who can do that.”

On Norman continuing to work:

Lear: “There’s no reason for it except appetite. You know, I’ve had as good a time in this business as anybody has ever had in any business ever I think in the history of humanity. And I love it. There is no greater spiritual experience than watching 200 people laugh when they come out of their seats and roll forward in a big laugh, belly laugh. And I love it. It’s enhanced my life. Every minute of it.”
Fonda: “I know why you’ve lived so long. You know, I’ve written a book about age. And I’ve interviewed at least a dozen people over 100. And they all have one thing in common: humor.”

On a favorite Golden Globes moment:

Lear: “The year we had lobster rolls.”
Fonda: “I had retired from the entertainment business – I had no intention of coming back. My son, the actor Troy Garrity was nominated for a Golden Globe for his role in Soldier’s Girl, and he invited me to be his plus one, his escort. And walking the red carpet with my son when he was the one that was being nominated – he lost to Al Pacino, he should have won – but I mean, losing to Al Pacino isn’t so bad. That was the most fun that I ever had.”