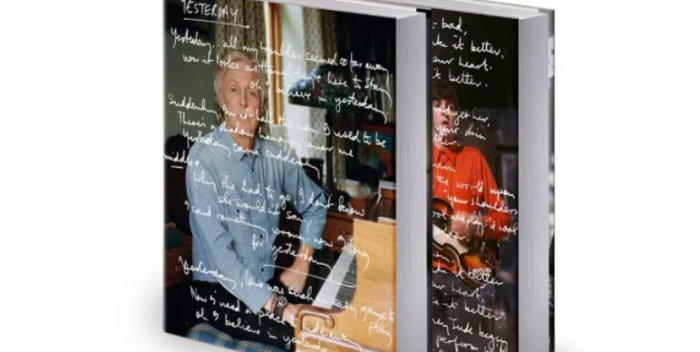 Paul McCartney been busy through the pandemic, that’s for sure. First he released the much praised “McCartney III” and it was his first real number 1 album in 31 years.

Now he’s releasing a gift book/memoir that will retail for $100 in November. “The Lyrics” will combine the words to 154 of his famous songs in alphabetical rather than chronological order to provide what he calls a “kaleidoscopic” account of his life. Presented with this is a treasure trove of material from McCartney’s personal archive – drafts, letters, photographs – never seen before.

Over two volumes, Paul recounts his life and art through the prism of 154 songs from all stages of his career.

Paul is telling us at 79 next fall, this will take the place of a traditional memoir.

McCartney says: “More often than I can count, I’ve been asked if I would write an autobiography, but the time has never been right. The one thing I’ve always managed to do, whether at home or on the road, is to write new songs. I know that some people, when they get to a certain age, like to go to a diary to recall day-to-day events from the past, but I have no such notebooks. What I do have are my songs, hundreds of them, which I’ve learned serve much the same purpose. And these songs span my entire life.”

This will come just in time for Christmas and holiday gift giving, and right after the delayed 50th anniversary of “Let it Be” releases. And you know, we want all of it!