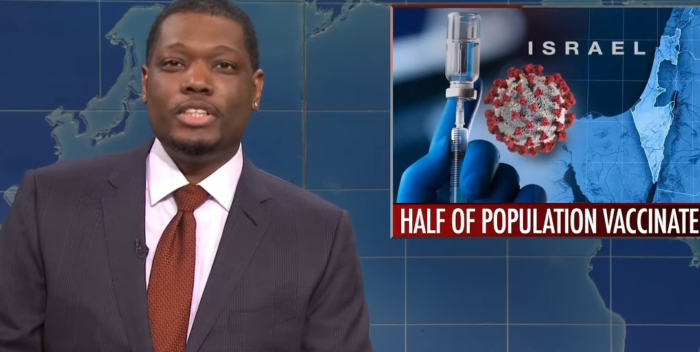 SUNDAY 10:30AM UPDATE Just as I expected, there’s been an avalanche of criticism on social media overnight. But there have also been plenty of Tweets supporting Che by people who are either anti-Semitic or clueless. Che didn’t say, “the Israeli half.” He said “the Jewish half.” There’s a difference, even if he’s unaware of it. His joke was directed at a religion, not a state or government. That he didn’t understand that distinction is where the problem lies. And will perpetuate more anti-Semitism. I’m usually a fan of Che. But he’s made a big error that must be rectified.

SUNDAY 12:38AM Comedian Michael Che is already getting blasted midway through “Saturday Night Live” for an anti-Semitic joke.

During “Weekend Update,” Che joked that half the people in Israel had already been vaccinated and “I’m going to guess it’s the Jewish half.”

Lorne Michaels, who is Jewish, cannot be happy. (He might not be happy about some other references to his personal wealth during the segment.)

Che is getting a ton of criticism and anger on Twitter right now. But even worse– the anti-Semites are coming out, applauding the line. What a stupid thing he did. I think this will not be the end of it.

One Tweeter said: Michael Che perpetrated an anti- Semitic anti- Israel trope with his vaccine joke. Just as a fact check – Israel vaccinated 1/2 of its population of Israeli citizens – Arab, Jewish and Christian. Shame on you.

Another: WTF, SNL. Your no-reason quip about Israel only vaccinating Jews is not only a lie, but it perpetuates anti-semitism. Cheap shot that does more damage than the momentary, paltry laugh you got for that sorry excuse of a joke.