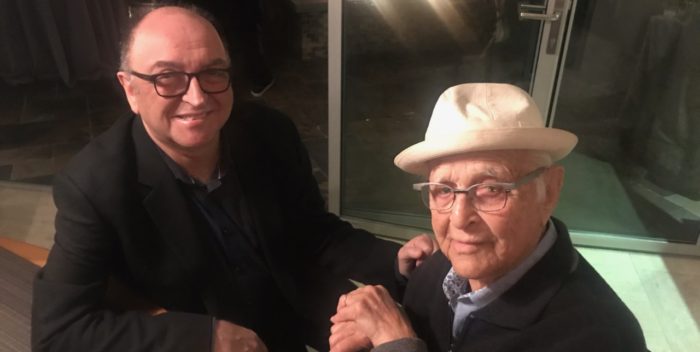 The great producer-writer-philanthropist Norman Lear will receive the Carol Burnett Award from the Golden Globes next month.

Lear, 98, joins Jane Fonda as one of the Globes’ two Lifetime Achievement winners this year. Maybe it’s a real sign of the times. These are the two most liberal Hollywood eminences. It’s a great rebuke to the last four miserable years.

Norman, like Jane, is a force of nature. We all know his TV credits from “All in the Family” and “The Jeffersons” to “Maude” and “One Day at a Time.” He’s made many fortunes. But he’s used his money and time and wisdom to do great things for the world. His People for the American Way has been a philanthropic giant for smart causes.

I can’t believe the Hollywood Foreign Press Association waited this long to give him an award. Like Dick van Dyke and the Kennedy Center– he’s 95 — they really rolled the dice on this one. But Norman and Jane will give amazing speeches, and I’ll be at home giving them standing ovations!

The Globes are on NBC February 28th. We’ll hear the nominations for their awards on February 3rd.

PS I never do this, but Leah Sydney took this picture of me with Norman last year in Los Angeles. It’s pretty nice.