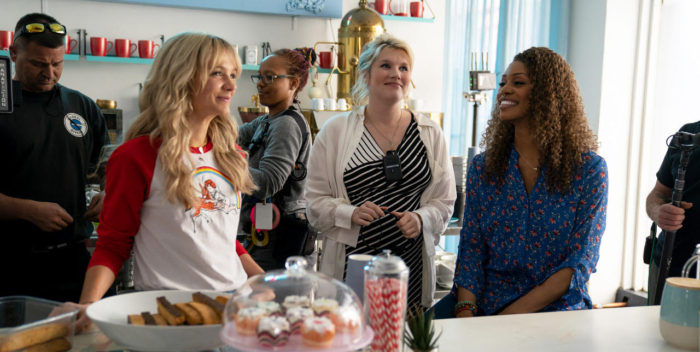 Carey Mulligan stars as Cassie, a woman out for revenge in “Promising Young Woman.” Directed, produced and written by female director Emerald Fennell, the film is a twisty, dark-comedy that’s also a thriller. But Cassie’s weapon of choice is not a gun or knife. It’s words. Text messages.

Recently at a virtual Q&A for BAFTA, Fennell, who is making her directing debut and is better known as a show runner for “Killing Eve” and an actress (Camilla Parker Bowles in “The Crown”), explained, “I suppose something I’m so interested in is how women express rage. It’s not really usually the way we see it in films like this, which is pop on a pair of sexy hot pants and get a machine gun.”

She added, “I really wanted to look at how a real woman might go about something like this. So you always think what would I do? What could I do? I certainly wouldn’t be much good in a fight. I definitely wouldn’t know how to use a gun. I wouldn’t trust myself with a knife. And it’s important that the moment that a weapon is introduced the thing that happens, happens. But what I could do is fuck with people. And I could plan. And I could do the thing which I did at school which was do my homework diligently. The trouble is with this film and with Casey’s journey is that she’s been keeping a lid on it for a long time, not looking at the thing, the reason for this… It becomes increasingly out of control I would say as the film goes on.”

Nearing 30, Cassie still lives with her parents (a hilarious Jennifer Coolidge and Clancy Brown) — to their chagrin— in their California suburban house decorated in pink and plastic that has a 90’s sitcom aesthetic. A barista at day in a coffee shop owned by her own friend Gail (Laverne Cox), Cassie trolls bars at night on the hunt. Blackout drunk, when she’s barely able to stand, “nice” guys come up to her and chivalrously offer to escort her home. Unsurprisingly they have other things in mind.

Asked what she wanted to make the film about, Fennell said, the idea came “from thinking a lot for a long time about the culture I grew up in. It was one where alcohol and drugs was used very, very freely as a way of sort of, I don’t know, greasing the wheels” of sexual encounters. “It just always felt like there was often this kind of awful grey area and lack of empathy comes to men and women in this kind of stuff and I wanted to explore it.”

Her process of writing is that a scene or a moment will come into her head and she goes from there. “For this movie it was a drunk girl lying on a bed, somebody undresses her and she’s drunkenly saying, ‘What are you doing?’ And then she’s sitting up sober and saying, ‘What were you doing?’”

This scene occurs early in the film. A man in a business suit (Adam Brody) is at the bar laughing and letting off steam with his buddies. He spots Cassie, her legs splayed and barely able to walk, and offers her a ride home. Instead he detours to his apartment where he begins to ply her with more alcohol. He maneuvers her to his bed and when she seems passed out he starts to take off her underpants. She sits upright, demanding to know: “What were you doing?” Fennell said once she visualized that scene the story came together. “At least I had an idea who she was and what kind of film it was going to be.”

Cassie dropped out of medical school after her best friend, Nina, was raped, too drunk to know what was going on, while his friends laughed and looked on. Even though it was seven years earlier, Cassie can’t move on.

“It’s always struck me as being about grief,” Mulligan said. “About being someone who’s stuck in a moment. To her it’s an act of loyalty. There’s something sort of childlike about it, her absolute refusal to let it go… Emerald and I talked and talked about all that kind of stuff the whole way…and that process continued in between scenes in between takes, in the evening we’d be texting.”

Asked her inspiration for the look and feel of the film, the director said, “I think probably really the obvious ones that I know lots of filmmakers use, sort of ‘Sweet Valley High,’ lots of ’90s TV series, Ms. magazine…There was a ton of stuff, but mostly just wanted to create a super, super, almost sickeningly, cloyingly feminine world, something that felt familiar and looked beautiful, but also, like Cassie, wasn’t what it seemed, was inviting but would bite you back. So a lot of the references, from ‘To Die For,’ ‘Virgin Suicides,’ even sort of ‘Mother, May I Sleep with Murder?’ Those kinds of slightly gaudy ’90s made-for-TV movies that I love. Yeah, it needed to feel safe until it wasn’t.”

Asked if there was ever another title for the film, Fennell said, “There was some other titles that were a bit more sort of ambiguous maybe, but I think that it’s difficult with titles,” Fennell said. “It needed to represent the film in some way. So it needed to be slightly wry and ironic maybe, and to have a kind of knowingness about it, perhaps. I think it made sense that the film is about the promising woman that Cassie was, that Nina was. It was really interesting that whenever people abbreviate, and this still happens all the time, whenever people abbreviate the film, which they often do because the title is so long, they abbreviate it naturally to PYM because of the saying promising young man. It took me ages to work out why it was, because it was called to on files while we’re working on the film or people would send emails. And then I realized, ‘Oh God, of course,’ it’s a natural thing to say promising young man.”

Importantly, did she think the movie can change men’s views on women?

“I don’t know about that but I do hope it might make someone think twice about whether they might have a crack on a girl who’s had too much to drink. I think it’s going to be harder now for people who have seen it to play dumb anymore, I think… I hope.”