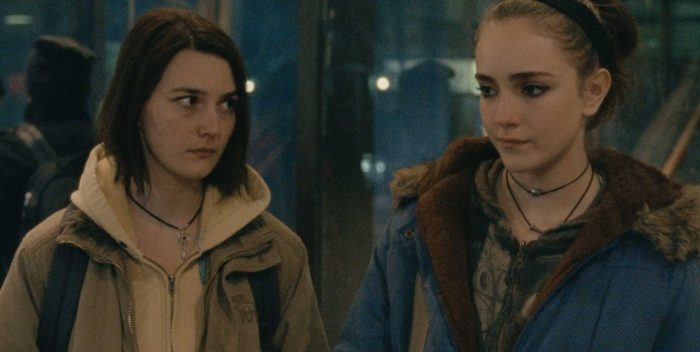 Eliza Hittman’s “Never Rarely Sometimes Maybe” came out literally as the pandemic hit. It went around me, over me, by me, but I don’t think I ever understood what it was. Now it’s been 10 months, and this intimate, indie gem is getting a lot of awards activity. So I watched it.

In rural, blue collar Pennsylvania, Autumn, who is 18 and a senior in high school, is pregnant. It’s possible, but never specified, that her stepfather, Ted (Ryan Eggold, from “New Amsterdam”) may have raped her or forced her into a relationship. Her mother, with some little kids in tow, is clueless. Since parental consent is required in Pennsylvania, Autumn and cousin Skylar, pocket some cash from the supermarket where they’re checkout girls, and take the bus to New York to get an abortion.

That’s about it. Except that Hittman’s direction of the two girls, Sidney Flanigan and Talia Ryder, is exceptional. You feel as if you’re on this grim, miserable journey with them. The girls are simultaneously blank faced and delivering layers of emotion as they proceed along this inevitable path. Hittman keeps them from cliches, but still follows them, almost in cinema verite, as they navigate New York and this constant, not so subtle, barrage of if not sexual violence, culture torture. There’s no situation in which they are not objectified. There’s no Gloria Steinem to help them. Their fates seem sealed, doomed, and dead ended.

This is no “Lady Bird.” There is no fun, so be warned. But it’s an accomplishment for everyone involved. You’d almost like to see a sequel to learn what happens when they get home. Except I think we know the answer.