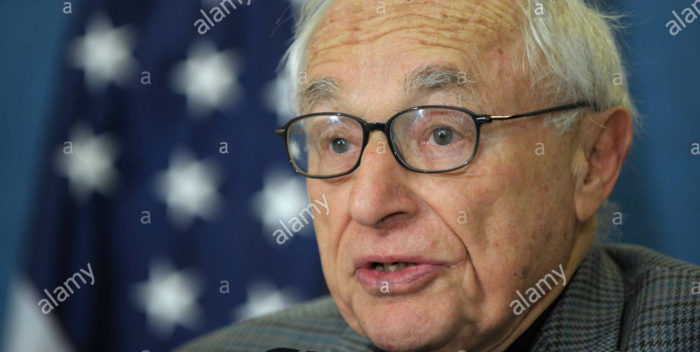 Walter Bernstein has died at age 101. He was amazing, as you can imagine. To have lived that long despite enduing a terrible curve ball in his professional life in the 1950s when he was at his peak writing screenplays. Walter was blacklisted by Senator Joseph McCarthy and the the HUAC (House Un-American Activities Committee). He wrote under pseudonyms. The whole saga of his punishment was finally told in Woody Allen’s “The Front,” written by Walter, in which Woody played him.

But back to that time: He’s uncredited on “The Magnificent Seven” and several projects. A decade was lost. It’s not until “Fail Safe” in 1964, directed by his friend Sidney Lumet that Bernstein’s name appears on the film. Many more years are lost until “The Front” and then a roll as it were: “Semi Tough,” “Yanks,” “The House on Carroll Street” come two decades after he should have had his career.

I had the pleasure of knowing Walter because he was married– his fourth marriage– to the great literary agent Gloria Loomis, whose daughter also happened to be the great movie publicist Diana Loomis. What an honor to meet Walter and get to know him a little bit. Considering what he’d been through, he was full of humor and grace. And he kept working til the age of 91.

Condolences to Gloria and Diana and his entire family. Walter leaves an enormous legacy just as a human being. He goes out a hero and a legend, and he got the last laugh on Joe McCarthy, Roy Cohn, and even Richard Nixon.