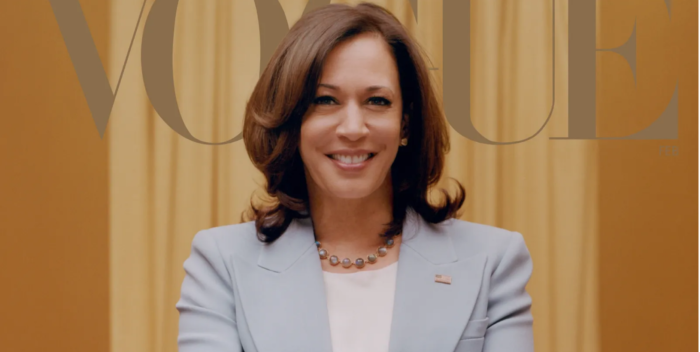 Anna Wintour is having a bad winter.

She’s insulted Vice President elect Kamala Harris by using a cover photo on Vogue that the VP’s staff didn’t approve. And, of course, they hate the one she chose.

This is for February Vogue, following January Vogue with Oscar winning actress and notorious sourpuss Frances McDormand on the cover. We love McDormand existentially, but for Vogue? Maybe the New Republic, or the Atlantic. (Is the New Republic still in business?)

Harris is presented in casual clothes with sneakers on. She’s giving her million dollar smile, so that helps. But couldn’t Wintour and her minions have come up with a clever way to make her look great and on a budget?

You see AOC was on the cover of Vanity Fair wearing very expensive, albeit borrowed, clothes. And readers went wild accusing her of abandoning her working class persona. Harris certainly wouldn’t want the same blow back. But how about some lighting? How about some effort?

Of course, Harris is Black, which isn’t Wintour’s forte in the first place. So she’s really getting creamed PR wise for blowing this project. And this, after Anna was appointed or anointed head of all Conde Nast editorial. This is like being named captain of the Titanic after they hit the iceberg.

And McDormand, then Harris– this isn’t Anna’s Vogue. This is Edward Enninful’s Vogue. The editor of British Vogue can pull off these intellectual race-crossing covers. Wintour cannot. She seems to have dropped celebrities and models in favor of Being Smart like Enninful, only to make a mess of it.

On top of all this, it’s February 1st. May 1st — the time of the Met Ball– is around the corner. Either plan it or abandon it. There’s just no way it’s going to happen until at least the fall, if ever. So Wintour really has her hands full. Enninful.