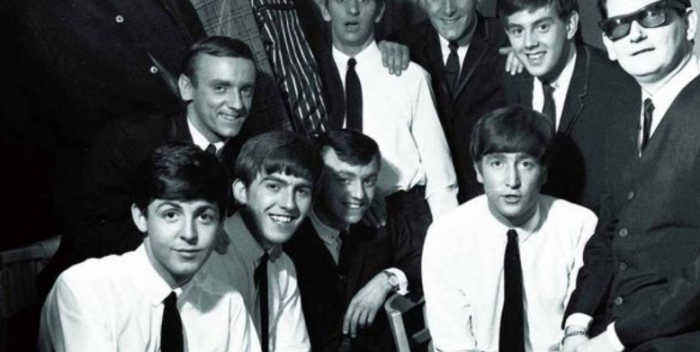 Gerry Marsden of Gerry and the Pacemakers died yesterday in Liverpool. He was 78. Paul McCartney remembered him sweetly on Twitter (see below).

McCartney and Marsden were the same age, and grew up as “rivals.” But their music was in Paul’s heart. I’ll never forget a Paul, Linda, and Wings soundcheck at Madison Square Garden in 1990. I was there reporting and interviewing for a big feature on them. At the soundcheck, Paul and the band performed “Don’t Let the Sun Catch You Crying.” It was beautiful. We didn’t have phones with recorders then. I picked up part of it on my old mini-tape recorder. I told Paul later I wished they’d played it in the show. Gerry’s passing must be another bittersweet moment for him, and for Ringo. So many great songs from the Pacemakers. PS Yes, those are the Beatles, the Pacemakers, and the late great Roy Orbison in that picture.

Gerry was a mate from our early days in Liverpool. He and his group were our biggest rivals on the local scene. His unforgettable performances of You’ll Never Walk Alone and Ferry Cross the Mersey remain in many people’s hearts as reminders of a joyful time in British music… pic.twitter.com/t1COAIwZVM