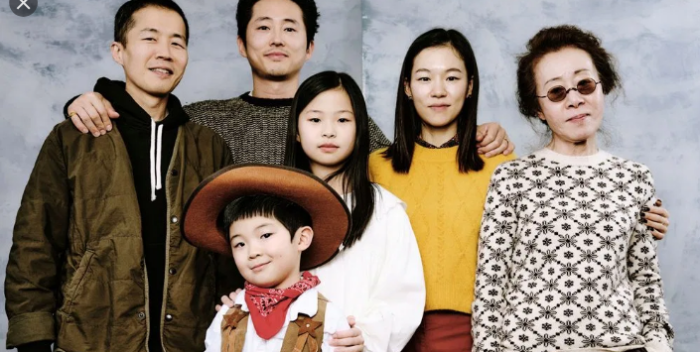 I’m very late to the party on Lee Isaac Chung’s “Minari” and don’t ask me why. A hit at last January’s Sundance, it didn’t start screening until November 23rd. I think it had an Oscar qualifying run for the week of December 11th. It will really be released on February 12, 2021 on Korean New Year.

A beautiful, unique drama, “Minari” is the anti-“Parasite.” In that depicts Koreans, “Minari”‘s earnest, hardscrabble people couldn’t be more different than the greedy, avaricious, violent sorts from “Parasite.”

The story is about Jacob (Steven Yeun, from “The Walking Dead,” in an Oscar worthy performance) bringing his Korean family to Arkansas in the 1980s to farm the land. This about as American a story as you can imagine, and Chung — who wrote the screenplay — deftly bypasses cliches and still recalls all the great, tough films in this category from “The Grapes of Wrath” to “Days of Heaven.” When Jacob, his wife, small son, and teen daughter arrive to find they are living in a house on wheels, the point of their journey is made fast: the dirt is fertile, the land is rich, and Jacob is going to grow crops in his Garden of Eden.

To mix things, Chung adds Jacob’s eccentric mother in law, Soonja, played serenely for an Oscar nomination by Yuh-jung Youn. It would seem she’s a revered actress in South Korea. Here, she’s already winning awards. Soonja, as David, her precocious 7 year old grandson (Alan S. Kim, a fine little actor), says, is not a “normal grandmother.” She curses and gambles, can’t bake cookies or cook anything. She’s not warm and fuzzy. But she provides Chung with equal weight to his story of the striving farm family.

Chung has populated his Arkansas farm town with colorful folks, most especially Will Patton as the off beat farmer who helps Jacob try to realize his dream. I didn’t realize how much I missed Will Patton until I saw him on screen. He really marches to his own drum. Where does he go between high profile jobs? I’m so glad to see him back, front and center, as Paul, a religious man who is definitely hearing jazz while carrying a huge wooden cross up and down dusty dirt roads.

Chung’s screenplay is really the star of “Minari” (a Korean vegetable like parsley). I loved the people in the town who welcome Jacob’s family. There is never a negative note about “foreigners” coming to their town. There is really just love. This isn’t to say the film is shmaltzy at all, it has its tough moments. Chung just explores family, what binds couples together during extreme stress, and again, the American dream that was possible to pursue in the 1980s– and maybe even now in the Biden era.

PS Kudos to Emile Mosseri for his score. It should be in everyone’s top 5 this year.