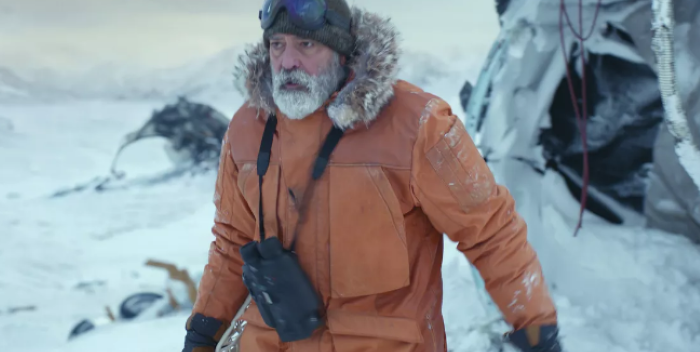 What the heck is George Clooney doing in space again? He made a splashy, memorable cameo in Alfonso Cuaron’s “Gravity,” a perfect trip through cosmos, and should have left well enough alone.

But he’s gone back. In “The Midnight Sky,” Clooney directs and stars in a space opera with two careening stories. In his, George– looking like Grizzly Adams– is Augustine. the last man on a weather station in the Arctic. Something’s gone wrong on Earth, everyone at the station is headed back to the world and oblivion. Clooney stays behind, and discovers a little girl has, too. She doesn’t speak, but she’s very well behaved and follows him around.

Meantime, in deep space, a group of astronauts is trying to get home. Their big, fancy space station ship is falling apart, and so are they. David Oyelowo and Felicity Jones have been up there so long they’re expecting a baby. Damien Bachir and Kyle Chandler are the main guys. and there’s a young black woman scientist played by an actress you’ve never seen before. Guess who’s not going to make it to the end? My sympathies to Tiffany Boone.

There’s also a bunch of people involved in a flashback business, with Ethan Peck playing Young Augustine. Somehow these sepia tinged scenes are supposed to relate to the present story.

Serious space movies really don’t work. “The Martian” was a rare exception. After “Ad Astra,” everyone should have just stopped. Clooney is a smart guy who’s acted in and directed many fine films. I was watching him in “The Descendants” this past weekend, just loving his subtle performance. Ditto “Up in the Air,” “Michael Clayton,” “Syriana,” “Burn After Reading,” “The American,” and “O Brother Where Art Thou?”

But recent projects have yielded trouble. “Money Monster,” ouch. Ditto “Tomorrowland,” and “Monuments Men,” which just implodes on touch. We could explain this looking at his resume: the focus is gone. He’s lost in Nespresso commercials and the sale of a Tequila company. He got married, had kids, made boat loads of money. He’s lost the beat.

In “Midnight Sky,” we’ve got excellent production, it looks gorgeous. I was sad not to be seeing it on a big screen. But we’ve been in this space before, with these same people. It’s not interesting. Also, Clooney’s big weather production with the little girl (the very plucky Caoilinn Springall) is a continuity wreck. It makes so little sense that just have to ignore the realities to keep going.

“Midnight Sky” begins playing on Netflix this weekend. No one will mind it. But really, when you get to the end credits, I don’t know what to say. The movie doesn’t so much end as it just drifts away. The credits just start rolling, rather arbitrarily, but some of the actors refuse to leave the screen. There’s a reason old movies ended with the words The End.