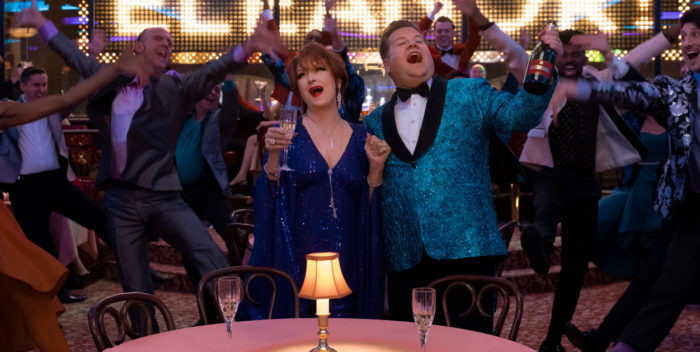 The road to hell is paved with good intentions, someone once said. Ryan Murphy certainly had plenty of good intentions in adapting a mediocre Broadway musical for Netflix with big stars. “The Prom” was fun on Broadway but enervating. Even though it’s a tribute to inclusion, its songs– which are still the biggest part of a musical– were never much more than billboards for the plot. Sorry. The show wasn’t a hit when it ran a couple of years ago.

How did it keep going as long as it did? The cast, led by Beth Leavel and Brooks Ashmanskas, was just like the characters they played: terrific Broadway performers who were now down on their luck a little. In the show, they’ve just closed a huge flop on opening night, a musical about Eleanor Roosevelt. Convinced they must come up with a cause to help them win good publicity, they head– with friends– to Indiana to help a gay high school girl gain acceptance to her prom.

But now we have Meryl Streep and James Corden, plus Nicole Kidman, Andrew Rannels, not to mention Kerry Washington, Keegan Michael Key, guest spots from Mary Kay Place and Tracey Ullman. We’ve also got the two young lesbians in love: the excellent Jo Ellen Pellman, and Ariana de Bose (soon to be in Spielberg’s “West Side Story” and a lock for a movie about Meghan Markle).

The opening is a sparkling kind of “Forbidden Broadway” as it’s all about inside stuff satirizing the Great White Way. Broadway enthusiasts will love the lyrics to the opening song, “It’s Not About Me,” because of course, it IS all about them. And there’s nothing better than when this posse arrives at a two star hotel and Streep presents her Tony Awards in order to get a suite (which they don’t have– and I don’t understand why we don’t actually see the rooms after all this fuss).

Within the first hour, Emma’s prom occurs, she’s tricked, and the show, I’m afraid, is over. This is what happened on Broadway. The plot is so thin that once we’ve crested to the reason we’ve all come to this town, we are done. The next almost hour is taken up with trying to fix the problem of the prom having just occurred and the gays not getting in. Plus Emma’s girlfriend, Alyssa, has thrown her under the bus. In the live theater I lost interest, and I did here, too.

Nicole Kidman, who’s just had a big success with “The Undoing” on HBO, has a tertiary role here– third billed, and her character of Angie, the has been chorus girl, remains underdeveloped. Kidman has a terrific number in the second hour, a satire of Bob Fosse and “Chicago,” that I could watch as a separate clip. But she’s a little wasted in this film. I think she just wanted to have fun, and it’s clear she does.

I’m seeing a lot of criticism for James Corden in other reviews. I liked him. Am I wrong? I think he has great musical talents, and he certainly can keep up with Streep, who’s his main scene partner. Streep is spot on playing all the notes she can find, but they’ve put her in an odd romantic situation with Keegan Michael Key, who’s 20 years her junior. On stage, that relationship made sense because the school principal and Dee Dee were the same age and the same points in their lives. Much as I love KMK, this was a part for Glynn Turman.

(Here’s an irony: Turman and Michael Potts, the original actor from the stage who played Key’s part, are featured in a great movie, “Ma Rainey’s Black Bottom.” Potts was good enough for that film, but not a big enough name for this one, the role he created. Crazy.)

Netflix is the right place for “The Prom.” In theaters this would not have played after a big first weekend in main markets. On Netflix, it can find a long life and many Golden Globe nominations. Oscars? I’m not so sure. Ironically, Meryl Streep is in another streaming movie, Steven Soderbergh’s “Let Them All Talk,” which could be Academy fodder if HBO Max steps up to that idea.