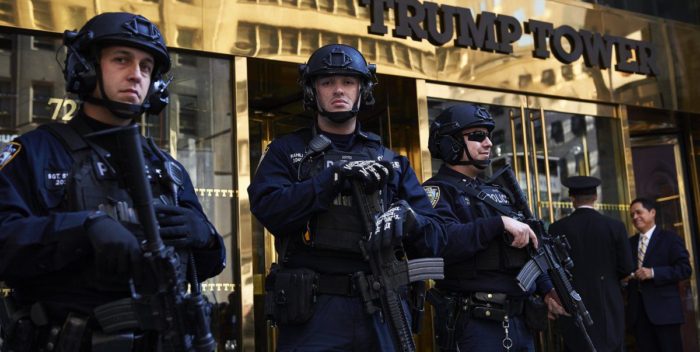 Of the many egregious things that happened the last four years, certainly the one that impacted New Yorkers most was the police presence around Trump Tower and the closing of East 56th Street between Fifth and Madison.

Well, that’s all going to change now that Trump is out as president and his primary residence will be in Palm Beach, Florida.

According to several reports tonight, The NYPD and U.S. Secret Service will work together to lessen the law enforcement footprint around Trump Tower on Fifth Avenue after Donald Trump leaves the White House in January. ABC News and WINS Radio are each reporting the welcome news.

Even better, East 56th St. will be reopened to traffic and business. I hope they have an official ceremony with a ribbon cutting. There’s joy in Mudville again!

Trump will not be welcome socially in New York, neither will Melania. I guess Barron will transfer to a school in Palm Beach near Mar-a-Lago, and we will never have to hear about them again. Next year, Broadway will re-open, society will kick back into high gear, and this whole thing will have been a very bad dream.

As for Trump Tower, no real New Yorkers ever went in there, anyway. No one ate there, and there was reason to be there. It was always a cheap reminder of the developer, who abused his own privileges when he destroyed the famed doors to the Bonwit Teller department store against the edict of the Landmark Commission.