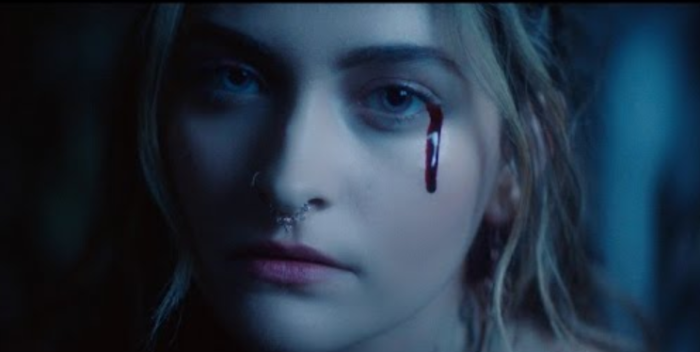 Paris Jackson. To me, she’s quite a story. She lost her father, the King of Pop, Michael Jackson, when she was 11. It wasn’t too long after that she was standing down her greedy aunts and uncles after they “kidnapped” her grandmother. Remember all that? Paris was in charge at an early age.

Her Twitter feed always revealed she was bright, and a quick study. She was burning through her music education, which didn’t include R&B but focused on grunge, folk, and metal. She didn’t go to college, but you can tell the world of music was her university. She wanted it. And she wanted to be a celebrity. She didn’t know it at first, but Paris had a lot of confidence. That’s what she got from Michael Jackson.

A few months ago Paris released an EP with her boyfriend, called The Soundflowers. It wasn’t very good but she believed in it. Now she’s released today her first solo album, “Wilted,” after signing with the very hot Republic Records. Somehow she found Andy Hull and the Manchester Orchestra. I don’t think many people had heard of them. But the collaboration works, however unlikely it would seem. They’ve made a very listenable, terrific moody pop album. It’s already number 56 on iTunes. Republic should get a CD out fast. The amazon.com audience will eat it up.

“Wilted” has an Enya feel to it, but it’s more than that. Paris’s vocals– she’s got a voice– glide over a gossamer cloud of electronics and acoustic guitar. What really helps is that the songs have melodies and hooks, they’re catchy. You want to play them again. The lead single, “Let Down,” is very good. But I liked a few others, the title track and the closing one, “Another Spring,” which could be her hit. It’s got a country folk feel perfect for Adult Contemporary radio, very Cranberries. You can hear her channeling Dolores O’Riordan. Paris should do a 23 and Me and see if there’s some Irish in her.

Paris and her brother Prince (we don’t know about Bigi, formerly Blanket, yet) really inherited a lot from Michael Jackson. They’ve got his determination, his interest in charity, and in film and music. They will be his legacy far more than moonwalking and dressing up from “Thriller.”