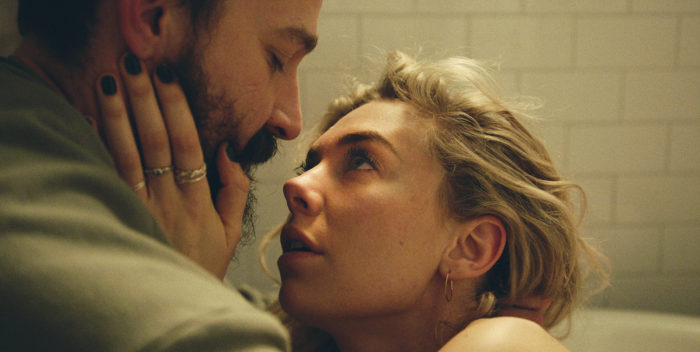 Where to begin with “Pieces of A Woman,” from Hungarian director Kornél Mundrucz? Is it a Lifetime movie pretending to be High Art, as some reviewers have said? Is it an art house film with some soapy elements? Is it chick-lit? I guess it’s a little of all these things, and it’s headed to Netflix. Frankly, that’s a good thing because the film– which has some moments of note– would have trouble finding an audience in theaters even without a pandemic.

Vanessa Kirby, known to us from “The Crown” and “Mission Impossible,” is an upscale Boston lady named Martha married to a blue collar worker, Sean, played by Shia LaBeouf. She’s nine months pregnant and everything looks peachy until it goes south. The first 20 minutes of the film are taken up with a disastrous home childbirth, although I thought the actress playing the midwife, Molly Parker, was excellent.

After things go very wrong, Ellen Burstyn is apparent as Elizabeth, the patrician mother of Martha who’s determined to prosecute the midwife. Like Martha, Elizabeth is miserable, and mother and daughter like to fight with each other. Martha and Sean aren’t dealing with grief well, either. He actually cheats on her — a quickie– with her cousin, who is, also, improbably. the prosecutor in the case. (How this happens is beyond me.)

If you can make it past the child-birthing sequence — and trust me, it’s hard — there’s a movie in the clearing. I’m not sure if it’s a good movie, but it has intelligent performances. Burstyn — who will be 88 next month– gets a big Oscar speech, which should qualify her. She’s really terrific. Kirby is very good. But Martha is such a bitch that it’s hard to feel sorry for her. LaBeouf’s work is also commendable and real. But Sean gets tossed away instead of being allowed to grow into a human. He also goes full frontal, a couple of times, and gets into a questionably rough sex situation with Kirby. None of these things would ever happen on Lifetime. LaBeouf is also now racking up numbers of times he shows his derriere on film. (You could call this movie “Pieces of a Man.”)

What I did like about “Pieces of a Woman” was Howard Shore’s score. It’s gorgeous and just right in its melancholy. Production values are fine, but I lived in Boston during its worst snowstorm and the streets were plowed a lot better than they are in this film. There are some weird inconsistencies as far as time of day from scene to scene, and so on. You can imagine if I was thinking about them, the movie was not holding me. I don’t think there’s a strong male audience for “Pieces of a Woman,” but that doesn’t matter much in the long run.