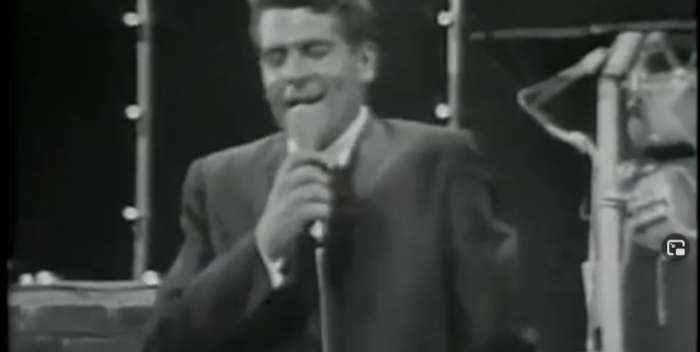 Len Barry has died. The 78 year old pop star of the early to mid 60s is still heard on the radio singing his hits “1, 2, 3” and “The Bristol Stomp” with his group the Dovells.

It’s weird, too, because I just heard “1, 2, 3” on the car radio in the last few days, and was singing along to it (don’t worry, I was alone). What a great hit. According to Wikipedia, Motown sued Len and his two co-writers because they thought the song sounded like a Supremes B side. They got 15% of the royalties. But I’d say that five years later Motown stole it back for the Jackson 5.

Anyway, listen to that sax, played by Artie Kaplan. The personnel on the original recording included Vinnie Bell, Bobby Eli, and Sal Ditroia on guitars; Joe Macho on bass; Artie Butler on percussion; the soon to be famous Leon Huff on piano; Bill Tole and Roswell Rudd on trombones; Lee Morgan on trumpet; Fred Hubbard on clarinet; and Bobby Gregg on drums.

A notice posted on the Dovells’ Facebook page announced the death, but no cause or survivors.

“May Len Barry, of the Dovells, rest in peace. He passed away on Thursday, November 5th, 2020.
From Jerry Gross:
We lost one of our original members of the group The DOVELLS.. Our lead singer from 1960 thru 1963- Len Barry has gone on to Rock ‘n’ Roll heaven. In these trying times that we’re living in, with the politics and the virus, and now one more sad moment. Very few people know that we did two reunion shows in 1994 in Syracuse New York, and Hartford Connecticut. THIS IS A PICTURE OF WHEN LEN JOINED US ON STAGE TO DO THE “BRISTOL STOMP “.
We had a fabulous time both on stage, and in the car between the dates. Between Lenny and Mark, the comedy never stopped. It was the best of times.
Great being with him again after 31 years. RIP old friend. From all the remaining Dovells. Jerry, Arnie, Mike, and Mark.”