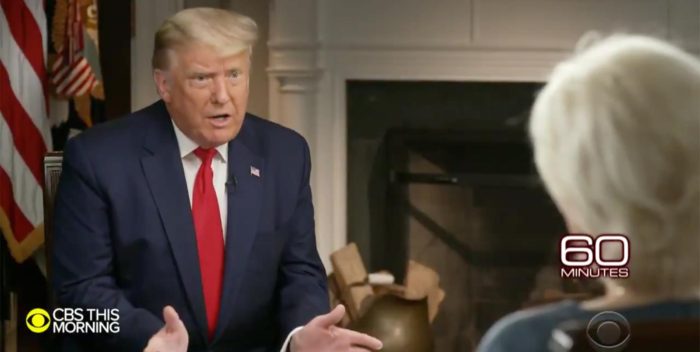 CBS and “60 Minutes” can thank Donald Trump for one of its biggest ratings ever.

Last night’s show, in which Trump made a fool of himself, scored an average of 15.5 million people. In the first half hour, when Lesley Stahl took Trump down and he fled the studio, the numbers were over 16 million.

In the second half hour, when Norah O’Donnell interviewed a more reasonable and statesman like Joe Biden, things calmed down to just 14.5 million.

For “60 Minutes,” which always wins Sunday night and averages 9 million viewers, the Trump clown show was its most watched episode in a long time, years even. The number was even higher than NFL Football an hour later on NBC.

This was the highest rated “60 Minutes” episode since Stormy Daniels scored 22 million viewers in March 2018. And that was a record breaker for an episode going back to 2008.

Trump himself fired up the audience to these numbers by immediately complaining to the world about Stahl and releasing his own tape of the interview, against his agreement with CBS News. He thought that would kill the ratings if his base could see him being “mistreated” by Stahl. But it just ginned up interest more, as everyone wanted to see Trump’s irrational behavior on a TV set. If this was the way he handled “60 Minutes,” what did he do in negotiations with North Korea, Russia, or China?

And why, during the Stahl interview, does he raise a glass of water to drink with two albeit tiny hands? That’s the act of a small child, a very elderly person or one who is infirm.