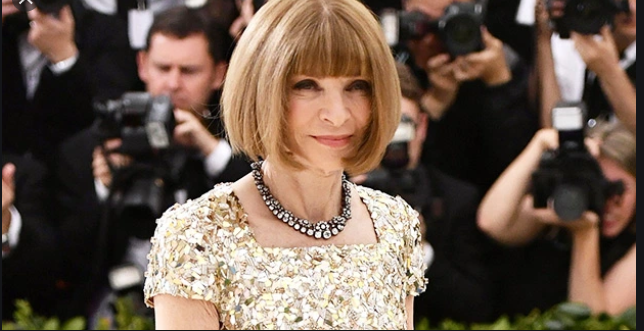 It’s not easy getting rid of Anna Wintour at Vogue. Like a South American dictator, she’s not going to leave on her own. Falling circulation and ad sales aren’t even doing the trick. So the New York Times has sent an assassin in the form of reporter Edmund Lee, who’s published a lengthy take out piece called “The White Issue: Has Anna Wintour’s Diversity Push Come Too Late?”

Adding insult to injury, the Times has illustrated the article with a terrible picture of Wintour without her trademark sunglasses, eye looking tired and puffy, her face in distress. The stage is set. The assassin’s gun is loaded. And then it’s just bullet after bullet.

Lee writes (they capitalize the word black, which I think is wrong): “Black journalists who have worked with Ms. Wintour, speaking on the condition of anonymity out of fear of retribution, said they had not gotten over their experiences at a magazine whose workplace mirrored its exclusive pages…Under Ms. Wintour, 18 people said, Vogue welcomed a certain type of employee — someone who is thin and white, typically from a wealthy family and educated at elite schools. Of the 18, 11 people said that, in their view, Ms. Wintour should no longer be in charge of Vogue and should give up her post as Condé Nast’s editorial leader.”

Got that? Eleven people said Anna should be out.

Wintour responded to all the criticism– only Naomi Campbell supported her– with a statement: “I strongly believe that the most important thing any of us can do in our work is to provide opportunities for those who may not have had access to them. Undoubtedly, I have made mistakes along the way, and if any mistakes were made at Vogue under my watch, they are mine to own and remedy and I am committed to doing the work.”

As Lee sets about dissecting all of the photos of black people in Vogue as racist in one way or another, he notes this: Anna Wintour, who is lily white, is head of Conde Nast’s diversity and inclusion council, was “conspicuously absent” from a company meeting on race in June.

A couple of other notes: there’s a supportive quote from Radhika Jones, who’s wrecked Vanity Fair at Anna’s instruction. And of course, there’s a chime in from Andre Leon Talley, who’s made the take down of Wintour his main job since she unceremoniously ousted him and left him high and dry. Talley says:“Dame Anna Wintour is a colonial broad. She’s part of an environment of colonialism. She is entitled and I do not think she will ever let anything get in the way of her white privilege.”

The party is almost over.