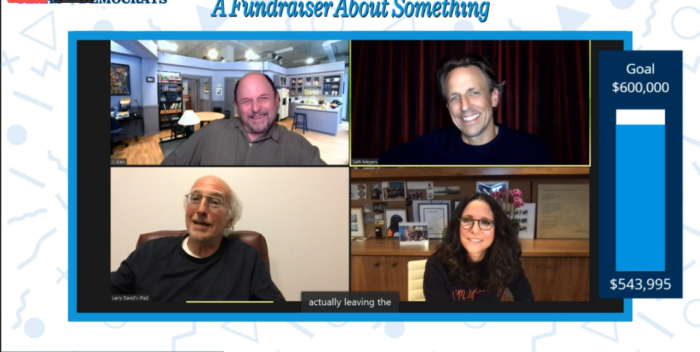 Jerry Seinfeld and Michael Richards were AWOL, but Julia Louis Dreyfus, Jason Alexander, and co-creator Larry David were interviewed by Seth Meyers in a 90 minute zoom call for donors to Texas Democrats. The result was $600,000 added to the til to turn Texas Blue.

Special guests on  “A Fundraiser About Something” who zoomed in included Beta O’Rourke, Julian Castro and his twin brother, Joaquin, and Texas Democratic leader Cliff Walker.

Alexander used a green screen so he could have a Zoom background of the Seinfeld set that he said he found online. Larry David, newly married, never looked more relaxed or happy or less curmudgeonly. JLD was, as usual, the star of the show explaining important things like how he came up with the terrible dance routine in the show that Donald Trump recently seemed to emulate in real life.

Who cracked them up on stage the most? The answer was Jerry Stiller, who played Frank Costanza. I never knew this before, but they’d originally hired the famed actor John Randolph to play Frank but after a few scene they knew it wasn’t working. Stiller was called in immediately.

Each of the main guests got to choose a favorite episode. JLD’s was “The Soup Nazi,” Jason Alexander chose “The Marine Biologist,” and Larry David’s was “The Contest.” David also revealed that maybe his all time favorite line in the show’s run was Alexander, as George, pretending to be an architect who designed the Guggenheim Museum. “I always loved it when he said, “It didn’t take very long.”

Fans of the show should and can watch this 90 minute special. This is the link to contribute for replays. What’s really lovely is that you can contribute any amount, from $5 to whatever. It’s completely worth it. And each of the trio will either call a donor, or in Alexander’s case, he’s picking 10 random people to make outgoing voice messages for.