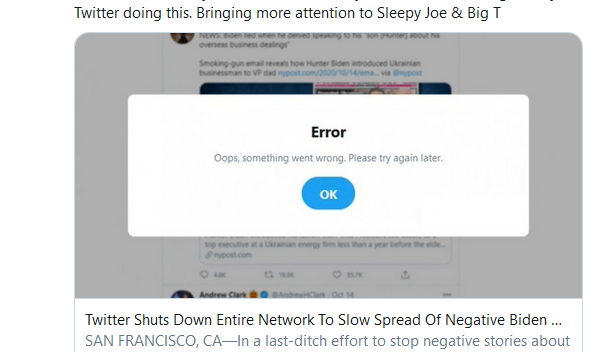 Donald Trump was tricked this morning by satirical newspaper The Babylon Bee, an online publication similar to The Onion.

He fell for it, hook, line, and sinker. He no doubt didn’t read beyond the headline into the copy. If he had, he might have seen: “After seeing account after account tweet out one particularly bad story, CEO Jack Dorsey realized he had to take action. Dorsey smashed a glass box in his office reading “Break In Case Of Bad Publicity For Democrats.” Inside the case was a sledgehammer for smashing Twitter’s servers. “Red alert — shut the servers down! Shut them all down!”

Instead, the president of the United States wrote:
“Wow, this has never been done in history. This includes his really bad interview last night. Why is Twitter doing this. Bringing more attention to Sleepy Joe & Big T”

Meantime, Trump’s Press Secretary Kayleigh McEnemy has had her Twitter account suspended forever, it seems. And the NYPost’s Twitter account also has been suspended for the last 48 hours. This is all because of a fake news story published by the Post involved Joe Biden’s son, Hunter, allegedly colluding with Ukrainians. Twitter has finally stepped up and done the right thing.

But this Tweet from Donald Trump will remain a classic 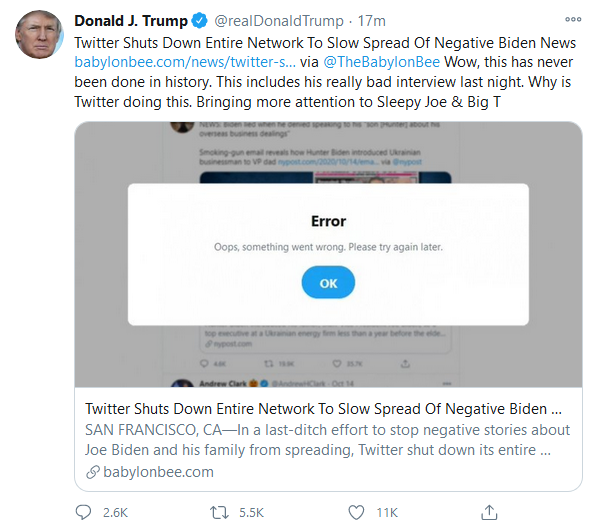