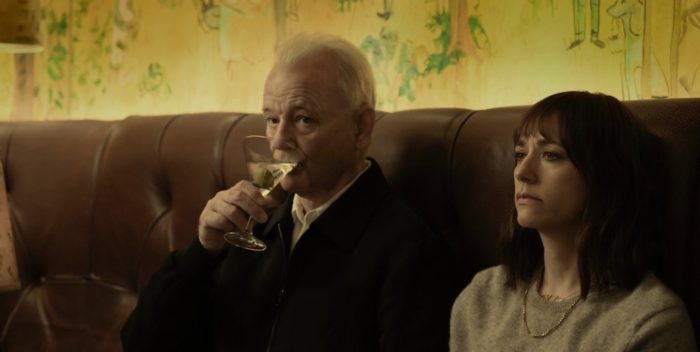 As I’ve just finished watching Sofia Coppola’s “On the Rocks,” I must say I’m surprised it has an 89 on Rotten Tomatoes. Did I watch the same movie? And yet, on further investigation, I guess I did see the film viewed by a few, discreet reviewers.

Sofia Coppola is one of my favorite directors, I’ve really enjoyed her films. That’s why I’m more than disappointed by “On the Rocks.” It’s billed as a comedy, which it isn’t unless I’ve forgotten what that’s supposed to mean. “On the Rocks” might have a chuckle here or there, but it’s more of a Lifetime movie built on the ashes of a Woody Allen left over. It’s very melancholy.

The actors are terrific, and you know, really, Rashida Jones and Bill Murray as daughter and father Laura and Felix. Who’s more charming than those two? But she thinks her husband, Dean (Marlon Wayans, who really used to be funny) is having an affair. So her wealthy dad (NY art dealer, car and driver, etc) has Dean followed around to New York hot spots. Then Felix convinces him daughter they should lie to everyone, leave her kids, and follow Dean to Mexico where he’s going to attend a conference and bring with him his leggy assistant with whom they think he’s sleeping.

Yes, that’s the story. Well, there’s more story but no one tells it. And the whole thing is set in New York’s very 1 percent stratosphere of giant loft apartments in Tribeca, and moneymoneymoney and no traffic anywhere so you can drive, and park. and no one gets in your way. There’s one nice sequence of Bill and Rashida racing a little red sports car around and being stopped by a cop whose Dad, of course, Bill knows. And who can beat Bill Murray sweetly singing “Mexicali” to tourists a Mexican resort?

But what is going on here? Father and daughter bonding? It’s all very vague. And creepy, since Murray and Jones act more like a couple than she does with Wayans. Yes the parents broke up when Laura was little, but who cares? Rashida’s character is a famous writer now living a great life. Yet she acts like a naif from Omaha in the 1950s. None of it quite makes any sense, particularly when they get into the mechanics of Bill and Rashida following Marlon, the husband, to Mexico. There are very wide plot holes here. Suspension of disbelief is fully required.

And the Woody Allen thing is pretty blatant. By the time Bill and Rashida stop for a drink for no one reason in Bemelman’s Bar at the Carlyle, just to be there for no reason, that’s the capper. References to Soho House, the 21 Club, and other snazzy locations might have had more zing for me before the pandemic, but they seem a little odd right now.

So it’s a pass on “On the Rocks,” which looks good but doesn’t get to anything. I’ve seen Sofia Coppola work wonders. She will again.