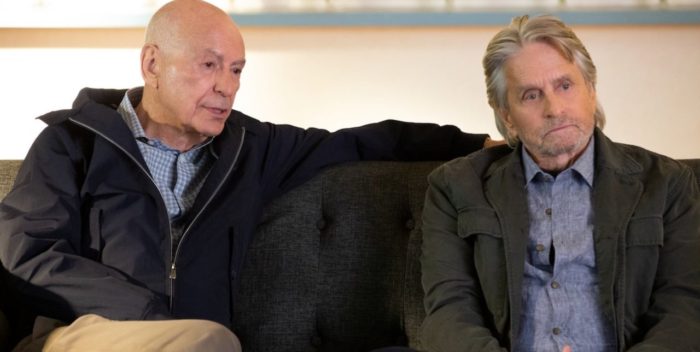 Alan Arkin is 86 years young. He has never been a TV actor. For the last two years, he was Michael Douglas’s co-star on Netflix’s “The Kominsky Method.” And now he’s leaving.

Why is he going? They only have one more season, “He never expected it to last more than two seasons,” says a friend.

Arkin has done all he can as Norman Newlander, a sidekick to Michael Douglas’s Kominsky. Arkin, an Oscar winner, garnered two Emmy nominations for Best Actor in a Comedy, but he can see the writing on the wall. He’s not going to win. At 86, why stick around?

Arkin won the Oscar for “Little Miss Sunshine” in 2006. Besides that he’s had 3 other Oscar nominations including “Argo.” He hasn’t been in a TV series since “One Centre Street” in 2001, and that was only because the great Sidney Lumet wrote and directed it. Before that, he had his own short lived comedy called “Harry,” in 1987.  But his real career is movies, and he has an enormous resume full of great performances.

My source says “Kominsky” was only supposed to be 2 seasons. The third season was a surprise announcement. Netflix probably wasn’t there with the money to keep Arkin interested. (At 86, you need some incentive to come into work every day.) “Kominsky” was sort of like a distaff “Grace and Frankie.” But in that case you had the intense motivation of the main actors, Jane Fonda and Lily Tomlin, to make it work. So they’ve gone 7 seasons.

Alan Arkin remains a great American movie star. Watch him in “Catch 22.” Or a little gem from 2008 called “Sunshine Cleaning.” He never fails to pull it off.