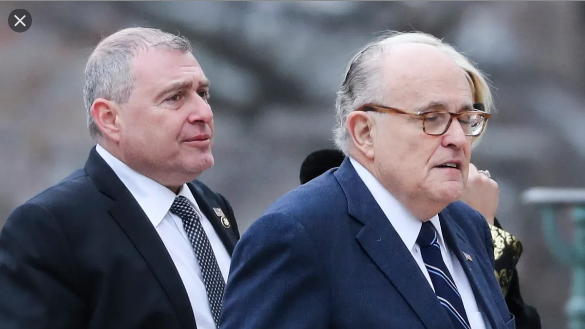 We have some weird stuff going on here in New York on the radio. I’m sure it’s the same everywhere.

Last March, WABC, which was once part of the ABC network and then owned by Cumulus, was purchased by local supermarket king John Catsimitidis for $12.5 million. I like John– who always talks about running for mayor — even though he’s a very right wing guy. But he’s stocked WABC with the most right wing conservative nut cases he could lay his hands on including disgraced ex Fox Newser Bill O’Reilly.

Our former mayor — hated in New York, by the way — Rudy Giuliani has a nightly show no one listens to where he rants and raves. Whoever’s listening to Rudy at 9pm on the radio needs a life, desperately, so you can imagine the audience.

Turns out Rudy also has a Sunday morning show. He has a co-host, too: his girlfriend, “Doctor” Maria Ryan. It’s called “Uncovering the Truth.” I’m not sure if this is a reference to Rudy’s three ex-wives, one of whom was his cousin. They each “uncovered the truth” about Rudy cheating on them.

Rudy’s most recent ex wife, Judith Nathan, discovered he was cheating on her with “Doctor” Ryan. I use quotation marks because Ryan is a PhD. She is not a medical doctor, or dental or even a shrink. She has a doctorate in health care administration from Warren National University, an online school that closed in 2009 following a failed accreditation bid. You can read all about her phoney baloney background here. “Uncovering the Truth,” by the way, is sponsored by Global Security Solutions, which coincidentally has the same initials as Rudy’s mysterious business endeavor, Giuliani Security and Safety.

WABC in New York used to the be the home of the Beatles and was the number 1 top 40 radio station in the US between the mid 60s and 1983. Catsimitidis recently added “Cousin” Bruce Morrow, a star from the station’s heyday, for a Saturday night oldies show. Cousin Brucie was his best hire, so I applaud that move. But Rudy and “Doctor” Maria? I’d think twice before tuning my dial to their show.

By the way, “Doctor” Ryan is pulling down over $300,000 as CEO of a place called Cottage Hospital in Woodsville, New Hampshire. Rudy always liked a partner with her own income. I’m not sure if she’s paid to do the radio show.