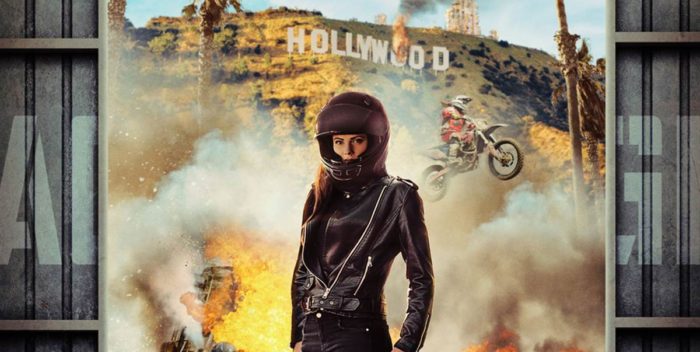 April Wright’s latest film venture, the entertaining and informative documentary, “Stuntwomen: The Untold Hollywood Story” (her third feature) tells the long overdue story throughout history and to the present day of women in the stunt business which for years and still is the domain of men.

Directed by April Wright, the film is based on the book by Mollie Gregory and narrated by actress Michelle Rodriguez. Rodriguez, familiar with that world as per her role in the “Fast & Furious” franchise, is a co-producer and participant as well. The women are intriguing, saucy and fun, albeit with serious things to say. Inequity in pay, respect and job opportunities existed then and still do now.

From the Golden Age in Hollywood ( Helen Holmes was a pioneer) till the present day, the film shows how much has changed and how nothing has changed. Stunt doubling for years was mainly done by men, they dressed in drag and performed the stunts that women were thought ‘unable’ to do.

When women like Jeanne Epper, who’s best known for stunt doubling Lynda Carter in the kitschy 70’s star “Wonder Woman” and the many other women featured in the film, including; Julie Ann Johnson, Jadie David, Donna Evans, Donna Keegan, Amy Johnston and more, demanded change, it was slow to come. Filmmakers Paul Verhoeven, Paul Feig, Anne Fletcher, and Al Ruddy pay homage to the women and TCM’s Ben Mankiewicz gives inside perspective on the struggles these fearless women have faced throughout the decades. The footage of pop culture classics and behind the scenes goings on is fascinating and truly fun to watch.

Kudos to Executive Music Producer Bonnie Greenberg and composer Nora Kroll-Rosenbaum for an exciting, bouncy score that goes along with the eclectic footage. Diane Warren, the 11 time Oscar nominated brilliant and prolific songwriter, once again delivers a rousing song “Without A Net” sung by the recent Academy of Country Music standout Mickey Guyton.

“Stuntwomen” takes a long worthy look at these women whose contributions to film and TV have too long been ignored. (And how is there not an Oscar category for Stunt work?  Glaring omission from the Academy on that one.)