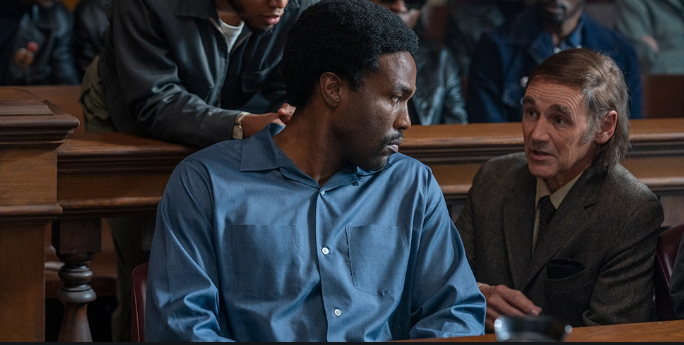 Aaron Sorkin has been working on “The Trial of the Chicago 7” since around 2007. When he finally made it he thought it was at Paramount. But now Netflix is releasing Sorkin’s second directing job tomorrow at some theaters around the country, and then shortly on their platform. It’s a big winner.

It’s September 1969 and the Chicago 7 — including Abbie Hoffman, Jerry Rubin, and Tom Hayden — are on trial in front of crazy judge Julius Hoffman for inciting riots during the 1968 Democratic convention. Also briefly on trial with them is Bobby Seale, head of the Black Panthers. The trial was incendiary. Even at age 12, I followed it avidly. Judge Hoffman was widely portrayed as a buffoon. Richard Nixon had just become president after LBJ, protests against the Vietnam War were rampant and violent, and we were still three years away from Watergate.

Does any of this sound familiar? Because the marching in the streets, riots and demonstrations, the general consensus that the president was engaged in an illegal war and was out of control– it could be NOW. Abbie, Jerry, and Tom are all gone, but if they came back right now, they’d be shaking their heads. Fifty years have passed, and nothing has changed.

That’s what makes Sorkin’s movie so great. First of all, the trial was so crazy that the transcripts were published, it was a book, there were staged readings, and other movies that quoted from it. Sorkin quotes from it in his dazzling script and even he’s prescient. He couldn’t have known a year ago, or 18 months ago, that we’d be this far down Trump’s dark rabbit hole. This movie should be seen by everyone before the election just to remind us of the dangers of an imperialistic president who thinks he’s above the law.

All the performances are top notch, textured, and amusing. Mark Rylance, to me, is the standout as William Kunstler, who defended this group. Already famous, he really made his name as the lawyer for the people. It’s a typical understated but forceful Rylance performance. Sacha Baron Cohen gets the flashy character, Abbie Hoffman, and shines. He’s got the nuances down. No Borat here. This is serious. Jeremy Strong, who just won an Emmy for “Succession,” is a very endearing Jerry Rubin. They are all topped off by Eddie Redmayne as a low key Tom Hayden. Redmayne sort of retreats from the glitz of the others around him, going for the understated.

This is important, especially for young people out in streets today. All the issues of protesting, social activism are here displayed almost as a blueprint for now. The cause for justice and equality never ended– and never ends. And what we thought was evil then, with Nixon, was nothing compared to what Trump is doing now. So watch this film carefully. It’s history coming to teach us a lesson.