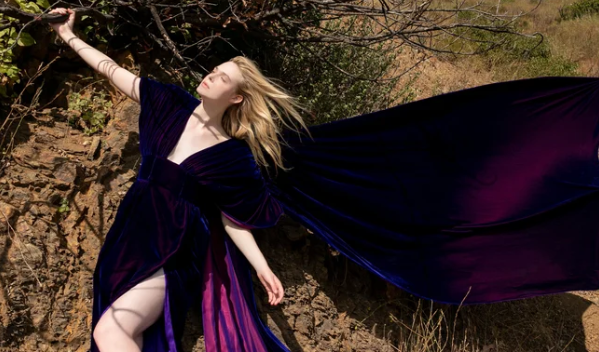 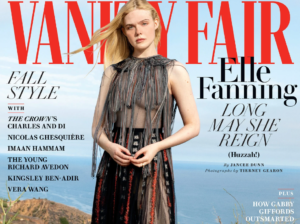 After two diverse covers in a row– Viola Davis, then Breonna Taylor* — the magazine for someone no one can remember has gotten back to basics.

Elle Fanning, blonde and 21, is on the cover, with hounds. If you didn’t know better, you’d swear it was Town & Country. The byline is Rolling Stone veteran Jancee Dunn, which reflects the influence of the Entertainment Weekly crowd that came in to revive VF’s Hollywood status. It also guarantees a nice People kind of cover, with no revelations. I was sort of hoping Jancee would ask Elle and Dakota Fanning about being sisters competing for acting roles. This could have been Olivia deHavilland and Joan Fontaine 2.0. Alas, crickets.

The new Vanity Fair cover has cut lines about royals, Richard Avedon, and Vera Wang which is code “It’s safe to read this now that Ta-Nehisi Coates is gone.”

Will Elle and pals revive VF’s readership? Who knows? Right now they’ve partnered with Astra Zeneca to produce a pandemic vaccine that will guarantee an Oscar party on April 25, 2021. Knowing the mag, they will arrange with the city of Los Angeles for their guests to be inoculated first before all other SoCal residents.

*PS that Breonna Taylor issue had a very short lifespan on sale, didn’t it?