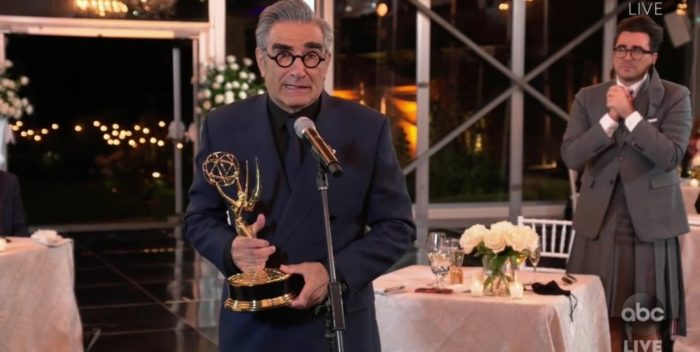 “Schitt’s Creek” was the big winner on the Emmy Awards last night– 7 awards. The rally took up the first hour of the Emmy show on ABC and tanked the ratings completely.

No one has ever seen “Schitt’s Creek.” On PopTV, that show’s highest rating was 501,000 for its finale on April 7th. It averaged around 300,000 viewers every week during its sixth and final season.

Prior to that, the average was around 250,000. In fact, their third season was higher than their fourth season.

If anyone’s seen “Schitt’s Creek,” it’s been on Netflix, although the streaming platform has never listed it as one of its most highly viewed shows.

And thus, we have the problem. A cult show loved by a small, devoted audience was not going to propel ratings for the Emmy Awards.

Most of the broadcast TV audience was watching football. Or doing something else. Maybe in Canada they watched, considering “Schitt’s Creek” comes from that country.

At least Catherine O’Hara and Eugene Levy finally got Emmy Awards. That’s some consolation. Now go watch all the Christopher Guest movies they’ve been in. See why they deserve lots of awards all the time.