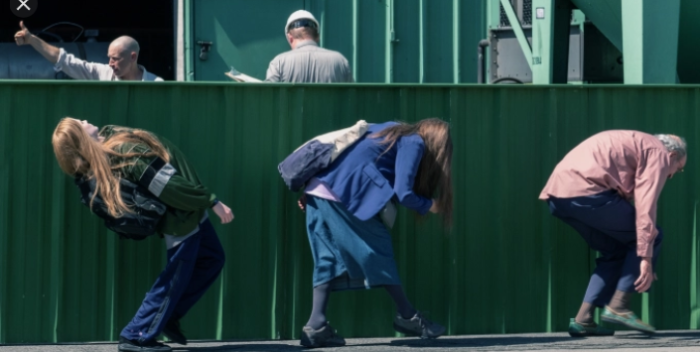 Miranda July’s “Me and You and Everyone We Know” is one of my favorite indie sort of avant garde movies ever. From 2004, it still packs so much charm it’s a pleasure to see it again from time to time. I hope it has grown an audience over the years.

Now comes “Kajillionaire” which is just as weird, fun, off beat, and sideways. It also has a quad of superb actors including two Oscar level players– Debra Winger, nominated thrice, and Richard Jenkins, nominated twice. They’re counterbalanced by the outstanding Evan Rachel Wood and Gina Rodriguez. And then, of course, there are some odd types played by actors you’ve never seen before and want to know better.

Winger and Jenkins are a couple, professional grifters in Los Angeles called the Dynes. Wood is their 26 year old adult daughter, Old Dolio, who is addicted to them and their lifestyle living in life’s sidewalk cracks. Indeed, they are so off the grid that their “apartment” is the office of a Bubble Factory, which seems to produce soap bubbles. The bubbles seep into the office, and the Dynes’ job is to contain the bubbles and dispose of them. Don’t think about this too much.

Wood’s Old Dolio comes up with a con and in the process they meet the Gina Rodriguez character on a plane. She is a little more of this world, but not much and soon she is embedded in this crowd. There is some kind of plot. The Dynes are behind in their rent at the Bubble Factor and must raise fifteen hundred dollars. Their landlord, I’d say, is not very demanding and quite eccentric, so there’s no real threat of eviction. But it’s a plot device in a movie that lives on story, character, and texture more than on common sense or reality.

Miranda July is a fantasist. I looked it up on Wikipedia and I’m glad to see she’s still married to Mike Mills, director of some other great great indie films like “20th Century Women” and “Thumbsucker.” Miranda — from the Catskills Grossinger family — is simply a wonderful artist who dabbles in many genres, from film to fashion and short stories, etc. Everything she does is interesting. In this time of serious dread, with almost sci-fi like problems pressing on us, her sense of whimsy and non linear thought is a blessing.

In other hands, “Kajillionaire” wouldn’t work. But Miranda has matured as an artist, and her cast is so committed to the cause, that this whole thing slowly stitches itself together. Winger, I’m sure, had a ball. She even limps, we don’t know why, and though you think she’s a hippie fruitcake, she’s quite savvy. Jenkins, also one of my favorite actors, makes total sense of this thing. (But think of him as the dead funeral director from “Six Feet Under.” He owns whatever he’s doing.) When the central story moves to Wood and Rodriguez, they are more than capable of taking over.

Look, this is not a cineplex movie. This is a film for people who are willing to think sideways, keep an open mind, and listen for rhythms that are not obvious. I feel about “Kajillionaire” like I felt about the original indies, like “Repo Man” or a Jim Jarmusch movie. I want to watch it a few times. I’m just so glad it exists, and I miss the people from it already. See it in a theater, see it at home, just see it.

PS I’m really impressed that Focus Features is releasing it, too. I’m sure they’re going to take good care of it.