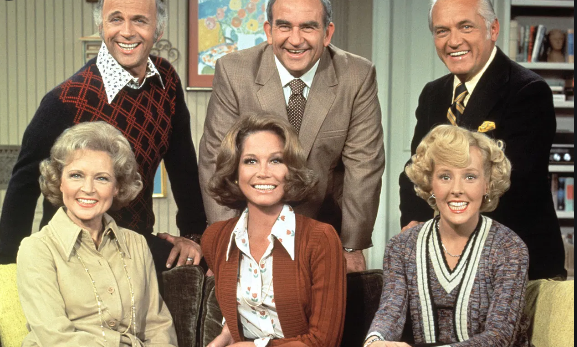 I am of the school that holds “MTM” still as as the best sitcom ever. It’s character driven and the characters– while eccentric– are never made fun of. Even Ted Baxter, the buffoon, is loved by his friends. Phyllis Lindstrom and Sue Anne Nivens, each self – centered, are sympathetic. The result are fully formed stories that lasted seven years and produced 41 Emmy Awards. “MTM” also launched a raft of other shows including “Rhoda” and “Lou Grant,” and a company that produced memorable dramas like “Hill Street Blues” and “St. Elsewhere.”

There are many favorite “MTM” episodes, including the pilot with the famous ‘I hate spunk’ exchange, and Mary, Phyllis, and Rhoda all meeting for the first time. I can’t show 168 episodes here, but one of my favorites, that I love to quote, was called “The Dinner Party” aka Veal Prince Orloff, Season 4, Episode 10. Mary throws one of her infamous disastrous dinner parties for a congresswoman. Sue Anne has catered the meal but there’s only enough for six people. Rhoda brings a guy from work who’s been fired (Henry Winkler, pre-“Happy Days”). And hilarity ensues.

I can’t believe Mary Tyler Moore, Valerie Harper, Ted Knight, and Georgia Engel (who joined the show later) are all gone. But Ed Asner, Gavin McLeod, Cloris Leachman, and of course the mighty Betty White are all still here. So is James L. Brooks. Happy anniversary to them all!

50 years ago this very day I was fortunate enough to speak the words “I hate spunk”. I have heard them repeated back to me thousands of times. I have always embraced them. They represent love, friendship, success, fulfilled dreams and so much more. #mtmshow50 #loveisallaround pic.twitter.com/sZg58loMGJ


PS Here’s a little trivia. The Mary Tyler Moore Show was such a hot commodity that all kinds of people wanted to be on it during its run from 1970 to 1977. One week, Carole King — who was huge on the radio then — did a walk on, said little, and was listed in the after credits as “Carole Larkey,” her then married name. I asked her 20 years later why and how it happened, but she had no actual reason. Can you imagine a pop star like Taylor Swift doing that now?