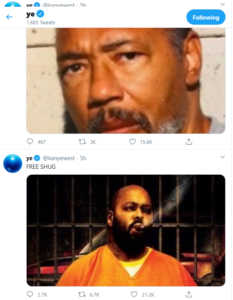 Kanye West is back on Twitter and having a manic episode that doesn’t stop.

This afternoon he tweeted that he was the head of Adidas. He also tweeted in two posts to “free Suge” and “free Hoover,” meaning convicted killers Marion Suge Knight and Larry Hoover.

Otherwise, everything is fine.

from Biography.com: Who Is Larry Hoover? Larry Hoover grew up in Chicago and became the leader of the Supreme Gangsters, which merged with a rival gang to become the Black Gangster Disciple Nation. In 1973, Hoover was sentenced to 150 to 200 years in prison for killing a drug dealer.

So Kanye wants him out on the street.

Marion Suge Knight, thanks, we know his story.

At least Kanye’s wife, Kim Kardashian, has been trying to get the wrongly convicted out of jail (although some of them don’t seem to appreciate it). Kanye wants to spring actual monsters. 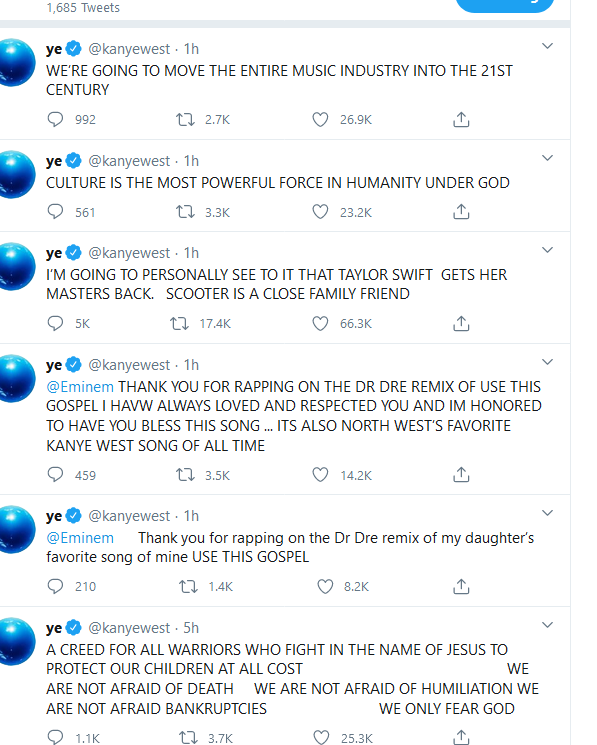 As for Adidas, he is not the head of the company. He designs ugly over priced sneakers for them. They aren’t even the company’s top sellers. Yet, Kanye says: “I am the head of adidas … I will bring adidas and puma back together and bring me and jay back together … all pumas designs are embarrassingly trash but I will personally design puma and adidas and make everything ok”

Yesterday he posted videos and stills of himself peeing into a toilet onto a Grammy award. He has 21 Grammy Awards, yet he hates the Recording Academy. He’s still harping on getting his master recordings back and revolutionizing the record industry. If someone doesn’t get hold of him, I’m afraid this will end badly. And we sure don’t want that.

By the way, the actual head of Adidas is Kasper Rørsted, an actual Harvard graduate. The head of Puma is Bjørn Gulden. I’d love to see their texts on this subject!!