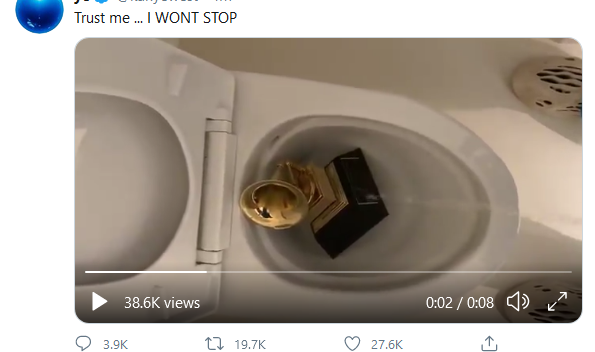 Kanye West has posted a video to Twitter in which he’s urinating on a Grammy Award placed in a toilet. It’s him, he’s wearing his ugly sneakers. Kanye has 21 Grammy Awards from 69 nominations!!!! It’s not like they’ve snubbed him.

This is an act of mental illness. It’s crude, coarse, and completely inappropriate. In all these years, the Grammys have done nothing to Kanye. But he’s made a fool of himself on stage, interrupted the show, and called them names. This is the last straw.

What he doesn’t realize is that plenty of his colleagues have won or been nominated for Grammys. They just acted in a civil, human way. This is crossing the line. Even for someone with bipolar condition.

PS Kanye is a presidential candidate from the Birthday Party. Yes, It’s true.

Hit songwriter Diane Warren responded on Twitter: “How vile and disrespectful of U. This was given to U by your peers out of respect for your work and U r literally pissing on them. I’ve won one Grammy and I’m forever grateful and humble that my peers found me worthy of it.”

Trust me … I WONT STOP pic.twitter.com/RmVkqrSa4F

ALL THE MUSICIANS WILL BE FREE !