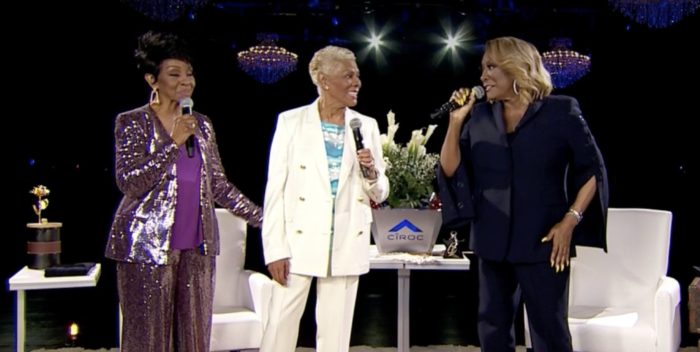 Gladys Knight and Patti Labelle scored 600,000 viewers for their Instagram Verzuz show which less a death cage match than a love in between the two famous singers.

Gladys and Patti sang a lot of their hits, some together even, and to track. Patti sat for most of the show and at one point did her make up and changed shoes while Gladys was singing! Gladys jumped up a lot while she sang because she couldn’t stop herself. They talked a lot about their voices changing, but they sounded the same as ever, like gold.

They hosted themselves, and did a fine job for women in their mid 70s who’ve seen and done it all. Who won? We did! Dionne Warwick joined them for two songs at the end including “Superwoman.”

I hope Verzuz will put this thing somewhere we can embed it and play it for you. A historic night!