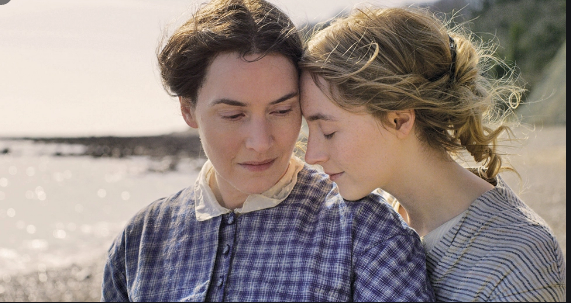 Well, we knew “Ammonite” — even with a good lesbian sex scene — was not a good movie. It was screened at the Toronto Film Festival tonight but not for press. Why not take a billboard out that says, “This sucks.”

We’ve already in recent years the French “Blue is the Warmest Color” and more recently “Portrait of a Lady on Fire.” They went…nowhere. And you could also tell things weren’t good when the publicity was already about the sex scene. We’re already getting mechanical drawings. So.

The Playlist: “Ammonite” sadly feels too distant, underpowered and colorless for its own good, as if somewhere down the line, its heart had died and hardened like a fossil waiting to be discovered.”

Vanity Fair: “has many trappings of contemporary indie moviemaking: it’s grim, spare, and so carefully sapped of vim it can barely breathe. It’s what a lot of Serious Cinema aims to be these days, opaque and withholding in a chilly gesture toward all the passion supposedly roiling beneath the surface.”

IndieWire: “My favorite scene in the ice-cold AMMONITE involves an unwell Saoirse Ronan being dumped into a swirling, frigid sea against her wishes. That’s sort of how this hollow drama feels all the way through, but at least the sea-dump had some energy and emotion.”

OK, so let’s move on. I can wait until November to not enjoy this movie. Now that I’ve seen Frances McDormand in “Nomadland” and have an idea of Jennifer Hudson in “Respect,” my Best Actress list is lining up nicely. Halle Berry may be on it, too. “Ammonite” is something I’ll use to get out those nasty spots.