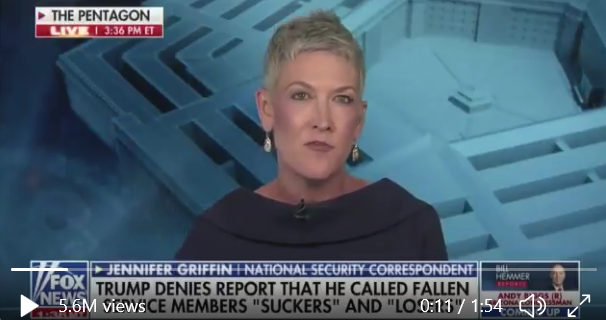 Fox News is having an internal civil war. It’s a battle for the truth and not alternative facts.

Jennifer Griffin, 51, a Harvard graduate, has been with the network since 1999. That’s 21 years of reporting as National Security Correspondent. Roger Ailes hired her in the era before he lost his mind and started harassing women. This was when he was only interested in journalists who had the right stuff.

Yesterday Griffin scored the scoop of a lifetime by working her sources. She posted to Twitter a series of posts confirming the reporting in The Atlantic magazine by Jeffrey Goldberg that Donald Trump thinks the military is full of “suckers” and “losers.”

Griffin appeared once on air on Fox News with anchor Jon Scott, and then not again. Her story was not repeated, and it’s never made it to the Fox News website. She’s being muffled from inside. I know what that’s like, when the forces of evil block the truth at Fox News. It used to happen regularly under John Moody, the crazy right wing chief of news in those days. (He was eventually decommissioned after posting a racist editorial.)

I’ve written to the editorial forces at Foxnews.com but no one has responded. They are like Pravda, the old Russian propaganda news service. No one is allowed to comment.

After Griffin wrote her pieces, Donald Trump Tweeted that she should be fired. That prompted a defense from Fox News’s Brett Baier.

“Two former sr Trump admin officials confirm .
@JeffreyGoldberg reporting that President Trump disparaged veterans and did not want to drive to honor American war dead at Aisne-Marne Cemetery outside Paris.”
and
“According to one former senior Trump administration official: “When the President spoke about the Vietnam War, he said, ‘It was a stupid war. Anyone who went was a sucker’.””
and
This former official heard the President say about American veterans: “What’s in it for them? They don’t make any money.” Source: “It was a character flaw of the President. He could not understand why someone would die for their country, not worth it.”
and
Regarding Trump’s July 4th military parade, during a planning session at the White House after seeing the Bastille Day parade in 2017, the President said regarding the inclusion of “wounded guys” “that’s not a good look” “Americans don’t like that,” source confirms.
Among other things. You can only imagine what’s going on internally now. Griffin went around them, thank goodness, to get the word out. After 21 years, she knows how this operation works. Clearly Fox News was never going to allow her a proper forum. One appearance with Jon Scott (who is a company soldier) was not going to get her news out. She was smart to Tweet. But now we may never  hear from her again.

One of the direct quotes from her source that Jennifer Griffin shares in this clip is “mad as a hornet.”