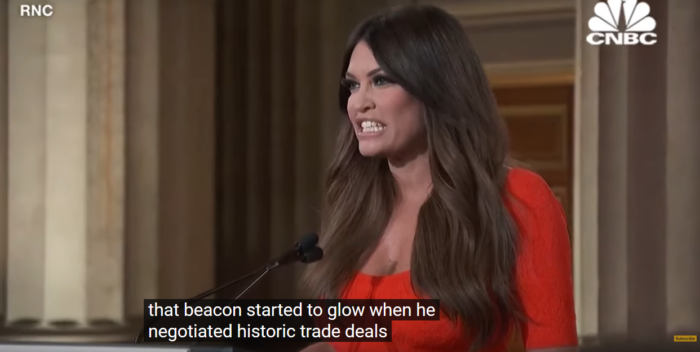 Kimberly Guilfoyle is Donald Trump Jr’s lady friend. She’s also a failed newscaster who’s reportedly paid $180,000 by the Trump campaign. Last night she exploded on stage during the Republican convention. She stopped short of singing “Don’t Cry for Me, Argentina,” but she came damn close. Perhaps imitating Judge Jeanine “Box Wine” Pirro, Kim didn’t realize there were NO PEOPLE In the auditorium as she shouted out her speech endorsing the man she prays will be her father in law one day. How did she prepare for this performance? Was it a case of Red Bull? Or was it something more? I’m told she had to be scraped off the ceiling later and reassembled at a Scientology retreat.

PS Some say that Jerry Falwell, Jr went home with these two last night and watched them have fully clothed relations for ten seconds before passing out. Luckily, Falwell was there to call the ambulance.