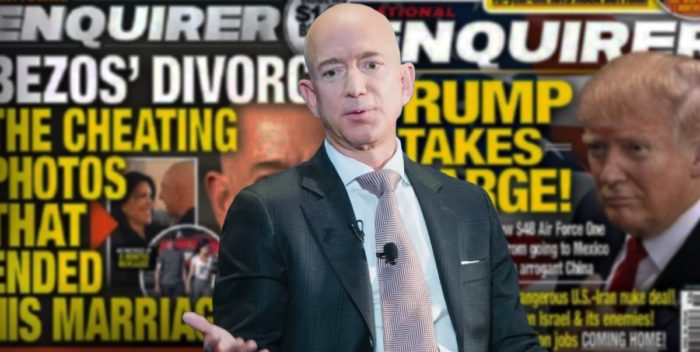 According to reports, David Pecker is out as the longtime head of American Media, the parent company of the National Enquirer.

Pecker was a media survivor, getting American Media through dozens of financial disasters, always somehow raising money at the last minute to keep everything afloat.

But the Chatham Assets fund that owns American Media has sold it as they take over McClatchy Newspapers from bankruptcy.

In the end, Pecker’s lunatic fealty to Donald Trump did him in.

“This is a transformative event that significantly reshapes Accelerate and American Media into a new type of media and marketing company with an unprecedented reach all the way to the sales floor,” claimed a press release issued late Friday by Georgia-based marketing executive David Parry, the CEO of Accelerate360, LLC, the new owner.

American Media was hobbled in the end by two episodes that did them in. One was the expose of Jeff Bezos, head of Amazon, and his extramarital affair. The second was participating in “catch and kill” stories while supporting Donald Trump in his first presidential election. That whole adventure is what sent Trump lawyer Michael Cohen to jail and revealed the Stormy Daniels affair.

I’m surprised that Pecker let go in this deal, but I guess he had to. The Enquirer was just about dead, as were its sister publications like Radar Online, Star, and Globe. The only functioning part of AMI, which will now be called A360 Media, is US Magazine, which Pecker bought from Jann Wenner in a fire sale. I’m not sure why Accelerate, which makes masks and other protective equipment.

The press release announcing the changes doesn’t even mention the Enquirer, just Us Weekly, Life & Style, OK!, and Men’s Journal. It also doesn’t mention that Chatham owns a large part of A360.

Mr. Pecker, 68, will serve as an executive adviser to the new company. “Pecker is effectively out,” says a source. Chris Scardino, who’s been with AMI for a long time, will take over.

SMYRNA, Ga., Aug. 21, 2020 /PRNewswire/ — The Board of Managers of American Media, LLC’s holding company have made the strategic decision to combine American Media and Accelerate360, LLC (Accelerate).  The announcement was made by Accelerate CEO David Parry. As part of the consolidation, American Media will be renamed A360 Media and American Media President and CEO, David J. Pecker has been named Executive Advisor of A360 Media effective immediately.

“This is a transformative event that significantly reshapes Accelerate and American Media into a new type of media and marketing company with an unprecedented reach all the way to the sales floor,” said Mr. Parry.

Mr. Parry also announced that Chris Scardino has been named President of A360 Media. Mr. Scardino, previously Executive Vice President and Group Publisher, is an 18-year veteran of American Media.

“A360 Media will be unlike anything the industry has seen with an ability to create direct access to consumers for our more than 2,300 active advertising partners,” said Mr. Scardino. “I am excited to work closely with the innovative team at Accelerate and how we can leverage their insights from recent success with LifeToGo and their unparalleled marketing insights and analytics for our brands and partners.”

A360 Media delivers extraordinary scale reaching more than 47 million men and women each month with the company’s celebrity magazines, including Us Weekly, Life & Style, and OK!, delivering the #1 market share in the category. The brand’s digital properties reach more than 60 million unique visitors monthly with more than 54 million social media fans & followers.

In addition to A360 Media, Accelerate’s core businesses also include Accelerate360 which provides logistics, sales and distribution solutions for both retailers and brands including a BTB wholesale platform for retailers to discover and purchase products, and LifeToGo, its ecommerce and direct-to-consumer marketplace.  Accelerate recently launched a successful line of Personal Protection Equipment that includes hand sanitizer, gloves, disinfectant wipes, cloth and disposable face masks, PPE safety packs and immunity boosting supplements under the LifeToGo brand. Accelerate also manages merchandising programs, featuring more than 600 SKUs in general merchandise and health and wellness, for national and regional grocers, and is the largest periodical distributor in North America delivering magazines to more than 55,000 retail locations weekly.

Synergies among the companies have already begun by leveraging A360 Media platform to build awareness and drive revenue of both LifeToGo products and other Accelerate supplier partners by utilizing advertising and marketing programs featuring products across A360 Media brands including Us Weekly, Life & Style, and Men’s Journal.

A360 Media will remain based in New York with some operations and shared services moving to Accelerate’s headquarters in Georgia.