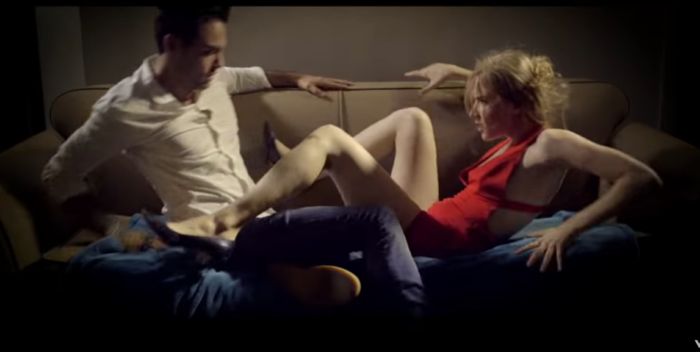 And now to the musical side of Hollywood studio chief career killer Charlotte Kirk.

In 2016 she made two soft core music videos. They’re on YouTube. Maybe you missed them. They are not included in the MTV Video Music Awards.

At least one of the videos was made by Charlotte’s not-Oscar-nominated director of her low budget movie, “OJ and Nicole.” She played Nicole.

The song, “I Get That Feeling Again” does not refer to her getting the feeling to have affairs with older men who are then ousted from their jobs. Not that feeling.

But the video does include Charlotte writhing around, giving this Meryl Streep some close looks at her derriere. There’s also a couch– a casting couch?– where she’s mauled by some yutz. And there’s a French pug who will probably sue.

Which sugar daddy paid for these videos? Unclear. But it does recall the days when Mel Gibson paid for Oksana Grigorieva’s music videos. I’m actually surprised Mel and Charlotte haven’t met yet. They’d be a great couple!

Poor Charlotte. In the old days, she’d be the No Regrets Jeans girl. Now she’s the No Career girl instead.