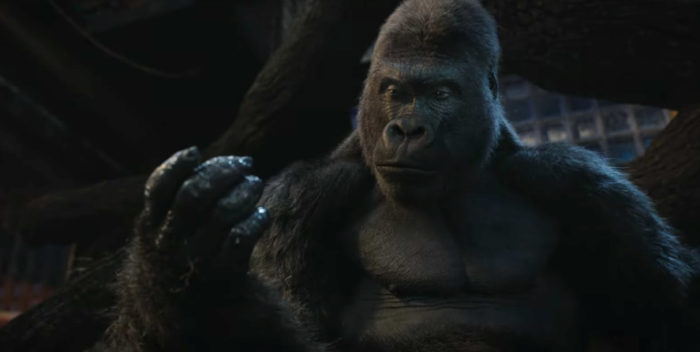 Disney’s “The One And Only Ivan” soon to be on DisneyPlus, happily hearkens back to the Disney films of yore.  Based on a real-life story from a children’s book, this winning and heartwarming film is directed by Thea Sharrock and written by Mike White. Given the disaster that was Tim Burton’s “Dumbo” these filmmakers did everything right that Burton got wrong.  By making the characters, human and animal, over-the-top appealing, funny and conflicted, the film strikes every chord of a Disney classic and more.

Bryan Cranston plays Mack who saves the silver-backed gorilla named Ivan as a baby but then puts him in a cage to be main attraction in a circus show at Exit 8 Big Top Mall and Video Arcade, where he is the ringmaster.  When the show’s popularity starts to wane, coupled with Ivan’s unhappiness, Ivan and his pals put together a plan to escape, which includes Ivan coming to terms with his troubled past. Mack resists at first but then relents to letting Ivan and his pals be free.

The CGI and the voices are just terrific; Sam Rockwell plays Ivan, and the other host of actors that lend their talented voices are Angelina Jolie, Danny DeVito, Helen Mirren, Brooklynn Prince, Chaka Khan, Ron Funches, Phillipa Soo and the screenwriter Mike White. All give personality, cleverness and endearment to each enchanting animal.  Bryan Cranston is of course wonderful and shout-outs go to Ramon Rodriguez as the compassionate keeper and Ariana Greenblatt who stunningly plays his young daughter Julia.  She is the first one to truly see that that Ivan, who trusts only her to show his crayon drawings (yup the real-life Ivan did draw) that he and his pals just want to be free.

Diane Warren’s breathtaking song, “Free” sung by Charlie Puth, is the “Born Free” of this generation.  The sanctity of precious animals, the heartwarming tale of the preciousness of animals and a classic Diane Warren song, make for a classic Disney film that is most welcome now. Is this Warren’s 12th Oscar nomination? Yes? And her win? Fingers crossed.