It’s Saturday night, so strange Tweets from Kanye West and Madonna are on the docket.

This evening Kanye tweeted best wishes to Kanye West. Were they tongue in cheek or hubris? You decide. He wrote:
“I know my mom and Kamala Harris would have been friends … congratulations on being the democratic Vice President nominee
🙏🏾
… all love and respect from the future president
🕊
It’s an honor to run against you”

A little earlier he Tweeted that he was like for a Christian CFO of his company because he’d reached “5 billion.” 5 billion burgers? These are his mania days, for sure.

Earlier Tweets all day Saturday back into Friday were just random things that made no sense, only to him, I guess. There was an obscure jab about snakes referencing Taylor Swift that wasn’t worth the effort.

Not gonna use a snake emoji cause you know why … I’m not sure if Christians are allowed to use snake emojis 🤔 pic.twitter.com/CUR6SSRNqP 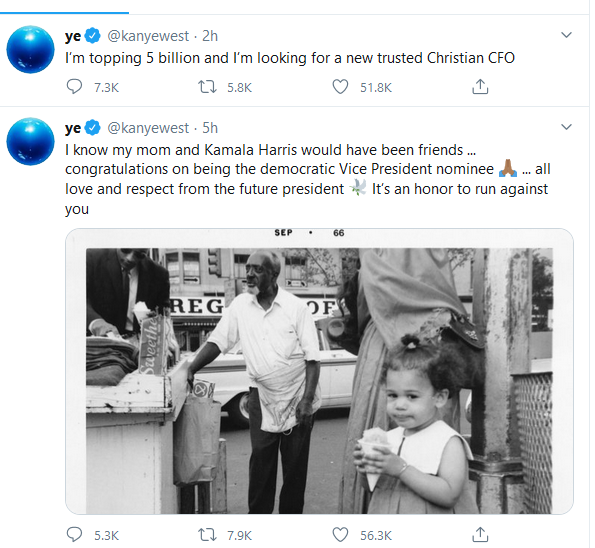