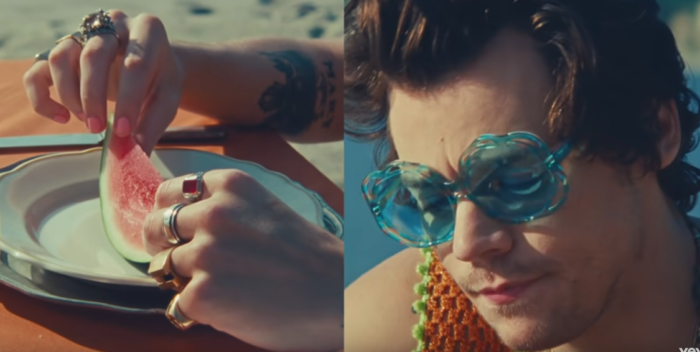 Congrats to Harry Styles! He’s got the official song of the summer. “Watermelon Sugar.”

Percolating for months, “Watermelon Sugar” has finally hit number 1 on iTunes. The single was released December 13, 2019 after debuting on his “Fine Line” album. The album is number 14 after spending a few weeks in the top 5 this summer.

“Sugar” is the second hit on the album after “Adore You,” which has hung in there even though it didn’t get to the top.

This is when you crown the Song of the Summer. It’s been there for months, it’s finally cresting, it’s everywhere, and people are saying, “You know, I like that song. Pass the iced tea.” Or margarita.

Harry wrote the song with Mitch Rowland, Tyler Johnson, and Thomas Tull. They took their inspiration from Richard Brautigan’s post-apocalyptic novel, “In Watermelon Sugar.” These guys have really studied 1969 closely.

So how did this happen? I mean, besides the hard work of the Sony-Columbia radio people who stuck with the idea of making Harry a superstar? Was it just the association of summer, watermelon, and so on? Maybe.

But also, “Watermelon Sugar” is a throw back to 1969 pure pop, like the Archies’ “Sugar Sugar.” It’s short and concise and ever so catchy.

And get this: the video has 75 million plays on YouTube.