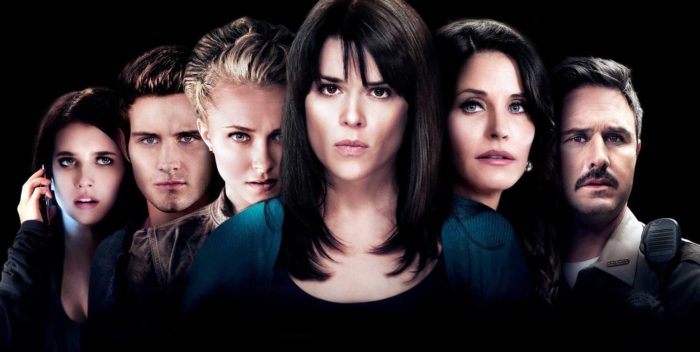 Surprise! Courteney Cox has joined the “Scream” reboot. David Arquette was already announced. LOL. Neve Campbell will be next. I’m sure the deals were all done a long time ago.

“Ready or Not” directors Matthew Bettinelli-Olpin and Tyler Gillett are helming the reboot from a script by James Vanderbilt (“Murder Mystery,” “Zodiac,” “The Amazing Spider-Man”) and Guy Busick (“Ready or Not”).

Original writer Kevin Williamson and Chad Villella are executive producing with Project X Entertainment’s Vanderbilt, Paul Neinstein and William Sherak are producers. Bettinelli-Olpin, Gillett and Villella run the production company, Radio Silence. They said in a statement, “We can’t imagine ‘Scream’ without the iconic Gale Weathers and are so incredibly thrilled and humbled to have the opportunity to work with Courteney. We’re absolute mega fans of her work and we’re so excited to join her in the next chapter of the ‘Scream’ saga!”

The first “Scream” was launched in 1996 under Dimension/Miramax. It started a franchise that underwrote a lot of Oscar nominated movies over the years. The four “Scream” movies made a total of $608 million in worldwide box office with sequels released in 1997, 2000 and 2011.

Look for the new producers to cast a lot of hot, current kids as “Scream” needs a lot of red herrings and dead bodies so the three main characters can make it out alive. With the new diversity, I’d look for folks like RuPaul, Tiffany Haddish, and Kevin Hart. And I hope they hire Amber Ruffin to do something! But please, no Kardashians. None. Not even as a joke. Or Kanye. Please.