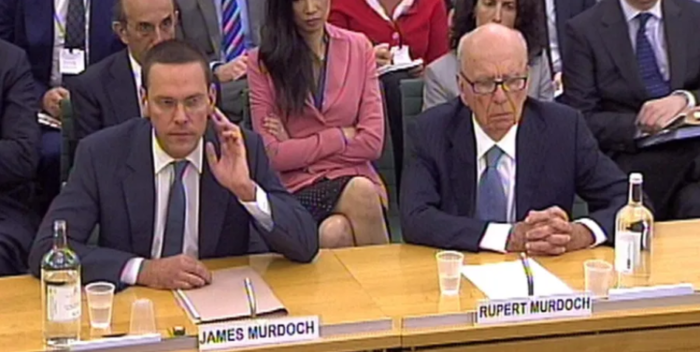 As I’ve said before, James is like Michael Corleone in The Godfather Part 2. He wants go legit and leave behind his family’s history.

James tries in his resignation letter to disavow News Corp. and Fox News and all the terrible things they’ve done and perpetuated– as if he was forced at gunpoint to help create the hacking scandal in the British press. He will soon be recording a remix of “It Wasn’t Me” with Shaggy.

“My resignation is due to disagreements over certain editorial content published by the Company’s news outlets and certain other strategic decisions.”

Ah yes. But James has a reported $2 billion made from News Corp and that editorial content. He’s started a family fund called Lupa, meaning wolf. He’s invested in things like the Tribeca Film Festival where he can hobnob with Robert De Niro, who hates his father. James is buying other properties in the “real” or mainstream entertainment world. He wants to be accepted by those people after a lifetime of his father’s destruction. How else could he do it? He must publicly sever ties.

He’s still a Murdoch despite his public relations campaign to seem distanced from the family.  He and his have given over a million dollars, it’s reported, to elect Joe Biden. James wants to be applauded when he walks into attends premieres, Broadway first nights, and so on. He doesn’t want random people coming up and yelling at him at the Tribeca Film Festival, or Art Basel which he also just invested in. So he’s out of News Corp. and counting on the gullibility of his new friends.

But who won’t forget? All the celebrities whose phones were hacked by News of the World, the now defunct Murdoch tabloid. Not will the family of Milly Dowler, the murdered schoolgirl whose phone was hacked by Murdoch employees so they could get scoops.