Taylor Swift’s “Folklore” is going to be the stuff of… folklore!

The album dropped on Thursday night without any notice. But it was long in the planning stages. The work has paid off.

First of all, the total sales (streaming plus downloads) comes to 180,000 for Friday and Saturday. That’s pretty wild. 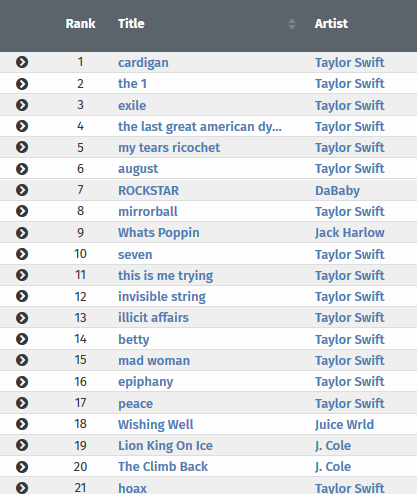 But then, according to Buzz Angle/Alpha Data, Swift has the top 16 out of 17 streaming tracks on their charts. The pictures are below. It’s like she’s playing pinball and the ball is just trapped at the top of the table, hitting award lights back and forth without stopping.

Interesting to note that Swift chose “Cardigan” for a video and also as a merchandising hook. That’s not the most popular song. Or the one getting attention. “The 1” has jumped out as the top track. And “Betty” is getting a lot of press because some people think it’s a same sex love song using the names of Blake Lively and Ryan Reynolds’ kids. If Swift is smart she’ll never explain it, a la “You’re So Vain.”

It’s a Taylor Swift summer. And that’s not a bummer! And still no CD’s!