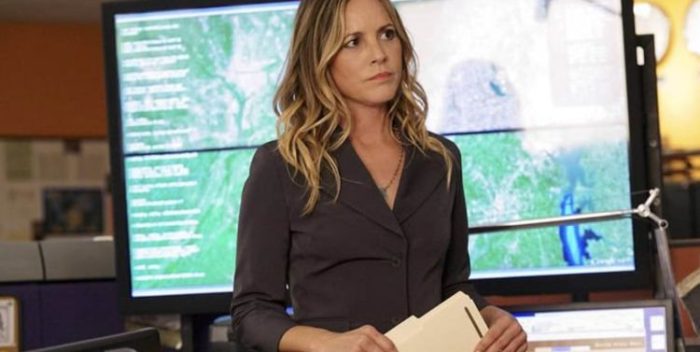 Women are not a long last commodity on the male-centric “NCIS.”

No, the show that is the domain of Mark Harmon isn’t particularly kind or pleasant to the fairer sex. Pauley Perrette was the exception. She made it through 15 seasons and 354 episodes. But when she left it was with bang, not a whimper.

Now Maria Bello, a fine film actress who signed on for three seasons, is exiting in November. Her contract is up, and that’s it. Her character will either find new work or wind up as fodder for a murder story. Either way, Bello will make her way back into films I hope or onto peak TV on Netflix, HBO, Showtime, etc.

Perrette and Bello aren’t the only gals who’ve come and gone from this less than Harmon-ious show. Cote de Pablo was wildly popular for many seasons before she had to take a break after 197 shows. She returned last season for special appearances, but she’s gone again. She’ll come back if the show needs her for ratings.

Lauren Holly, so great in “Picket Fences,” and many other shows, took a stab at it for 70 episodes, five more than Bello. She was happy to leave for greener pastures.

Sasha Alexander did 54 episodes. One of my all time faves, Jennifer Esposito, had 24 frames.

One survivor who’s made seven seasons is Emily Wickersham. She replaced Cote de Pablo in 2013. Her advantage right now is still being relatively young, 36, and they keep her out of Harmon’s storylines. Will she make it to the end? Time will tell.

The real long distance runner of “NCIS” is Sean Murray, who’s flown under the radar since day 1 in 2003 and is now only 42 years old. No one knows who he is, and he doesn’t care. He’s loaded. My hat is off to him. And considering how young he is, and how much he’s seen, he’s the one who will write the book. He’s the Don Galloway (“Ironside”) of “NCIS,” God bless him.

Mark Harmon turns 69 on September 2nd. Aside from Murray, “NCIS” is all about him. The show is number 1 in the ratings and the standard bearer for the 3 NCIS shows. This is his 18th season coming up, you know he’ll go for 20.