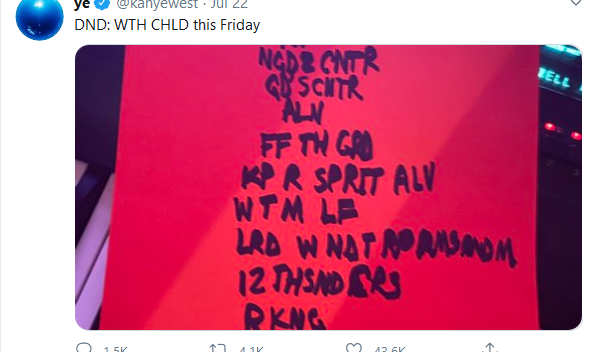 All week Kanye West was putting up tracklists for a new album called “Donda” or “Donda with Child.” Donda was his late mother’s name.

Kanye put up tracklists in his own hand, and printed out from a computer. He certainly thought he’d made an album. He even Tweeted its release date: July 24th.

Well, July 24th has come and gone. There was no album. It’s likely there never was an album, maybe just some ideas that hadn’t come together. And titles. He even posted a special font he thought he’d designed.

But like many things with Kanye, it all went up, up, up, in a puff of smoke. And to make it worse, his arch rival Taylor Swift did release a surprise album that shot straight to number 1 and put her whole catalog on the iTunes chart.

Maybe Kanye caught wind of Taylor’s secret album through his Universal Music sources and invented an album to come out on the same day. Anything is possible.

This evening, there is no mention of “Donda” on Kanye’s social media. Instead he Tweeted about “spray foam wall prototypes on the Yeezy campus.” He was visited by Justin Bieber and Damon Dash. It was like King Arthur and the Round Table.